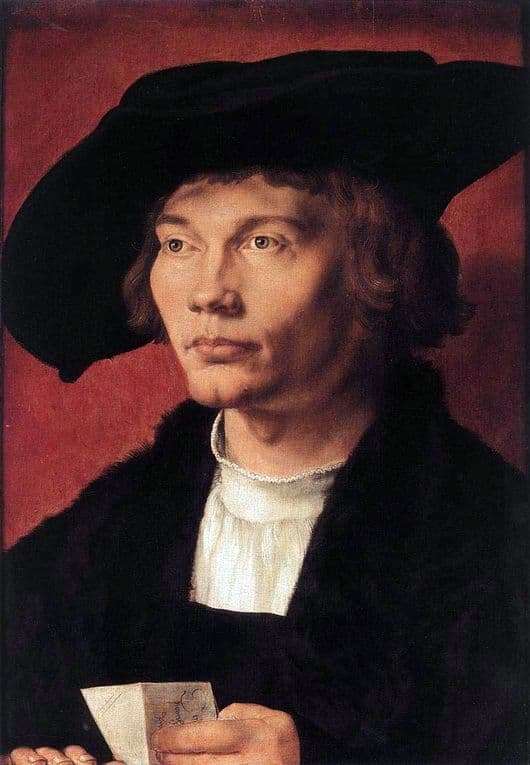 “Portrait of a Young Man,” written in 1521, refers to the late works of Albrecht Dürer. The author at that time already took place as a portrait painter, having written several dozen portraits of famous people of his time.

Creating a portrait, Durer sought to convey precisely the spiritual essence of the person depicted in it.

In this regard, “Portrait of a Young Man” is considered one of the best illustrations.

In the hands of a young man a piece of paper is probably a letter on which part of the address can be read – “Dem pernh… zw…”. The rest of the name is covered with fingers. For a long time it was thought that the picture depicted the famous South Dutch artist, court painter Carl V Bernart van Orley. At the moment there is an assumption that the name of a man is Bernhard von Riesen, mentioned by Dürer in his personal diaries. He was a merchant from Danzig. According to the records of Dürer, the artist received eight florins for this picture.

The image is made with oil on wood, and took the entire board. Moreover, both fields of the hat had to be cut off.

The young man is dressed in the German fashion of the first half of the 16th century. Dark colors of clothes allow you to concentrate on the face of a young man. His features are very correct and expressive: clearly defined chin, slightly thoughtful eyes, looking at something in the distance, folds of lips indicate that it was a strong-willed, energetic, purposeful person. Unfortunately, it is impossible to know how good Dürer showed himself as a good physiognomist in this case.

Bernhard von Riesen died at the age of thirty, a few months after writing the picture, in October 1521, during a regular plague epidemic. However, there is no definite evidence that it is his image in the picture.