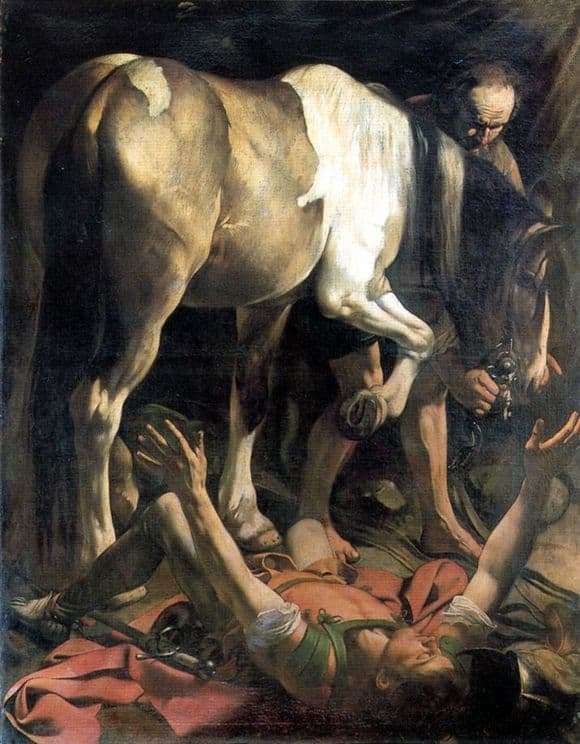 From the Acts of the Apostles, the painter Caravaggio drew a significant dramatic plot for writing paintings in the Roman church.

Saul was among the most formidable and ruthless persecutors of Christians. According to legend, he was heading to Damascus to detain several supporters of Christ there.

The day before he received permission from the high priest to arrest them. When the persecutor was already approaching the destination, he was blinded by a bright heavenly light. Fell to the ground, he heard the distinct speech of Jesus, who asked in reproachful tone: “Why are you persecuting Me?”.

After that, Christ appeared to the disciple of Ananias, telling him to come to Saul’s dwelling place and put his hands to the blind, return his sight. The student completed this assignment. After clearing up, Saul was baptized under a new name – Paul became a preacher of the Christian faith.

The story, which radically changed the life of Saul, is described by the master with amazing expressiveness. The radiance from the appearance of Christ causes the former murderer to close his eyes tightly, to be horrified and to fall, in exhaustion, to the ground at the feet of the horse. The bulky horse body took up almost half of the canvas – in the upper fragment of the picture, it seemed to hang over a helpless fallen figure. In this way, Caravaggio distracts the beholder from the person, drawing the eye to a strong unearthly light above him.

The amazing work of the artist is remarkable by the fact that Paul, who fell from his horse, with his limbs, goes beyond the framing of the picture. Thanks to this ingenious way of building a composition, viewers are given the opportunity to feel themselves witnesses of what is happening in the picture, sharpen the feelings of the hero and believe in the supernaturalness of the event.

Now the realistic testimony of the divine phenomenon is kept in the Roman chapel of Santa Maria.