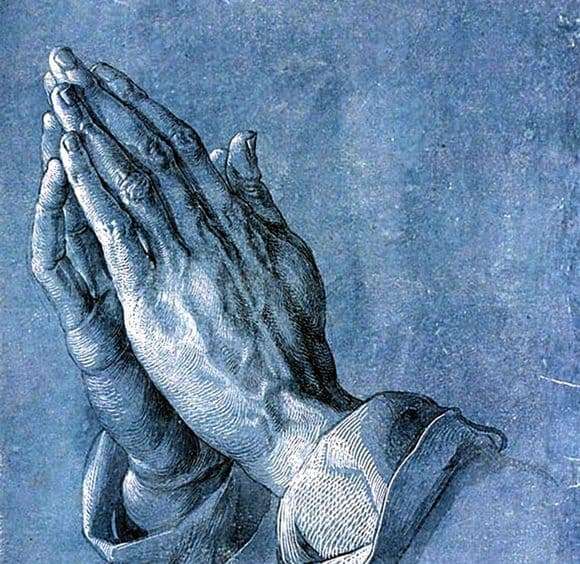 The history of this picture is amazing. This is not just a sketch of the hands, there is something more behind this image. Albrecht Durer captured on this engraving the hands of his brother, thanks to which the name of the artist is now known throughout the world. Sometime at the very beginning of a career, the two brothers agreed that they would be artists in turn. As you know, this profession brings income to only a few, and both boys understood this very well, so one of them had to do something more profitable, but difficult, so that the other could freely create. This hard worker and became the brother of Durer.

Unfortunately, by the time the time had come to change places, his hands were already so blunt that he could no longer become an artist. Resentment, however, he did not keep, as he was a man humble and pious. The hands of this noble praying brother Durer we see in the picture. Knowing the history of creation, you look at the work quite differently, realizing the full power of sacrificial brotherly love. Without realizing it, the brother sacrificed his dream to make the other’s dream come true. But both had a chance to realize the dream: one has only to look at these long thin fingers, as if created to hold a brush. The picture is an excellent example of the fact that in order to achieve expressiveness it is not necessary to use a lot of colors, just enough strokes, graphically accurate lines and black and white shades.

Dürer, as seen in the picture, is well acquainted with anatomy: the hands are written down to the smallest detail, clearly and reliably. Every vessel, every nail, every appearing vein on the hands, every small pad of fingers is written out thoroughly, scrupulously, precisely. The “hands of a man of prayer” were copied many times, depicted on postcards, paintings, illustrations and even coins. This is not only one of Dürer’s most recognizable works, but also one of the most famous paintings in the history of fine art in general.