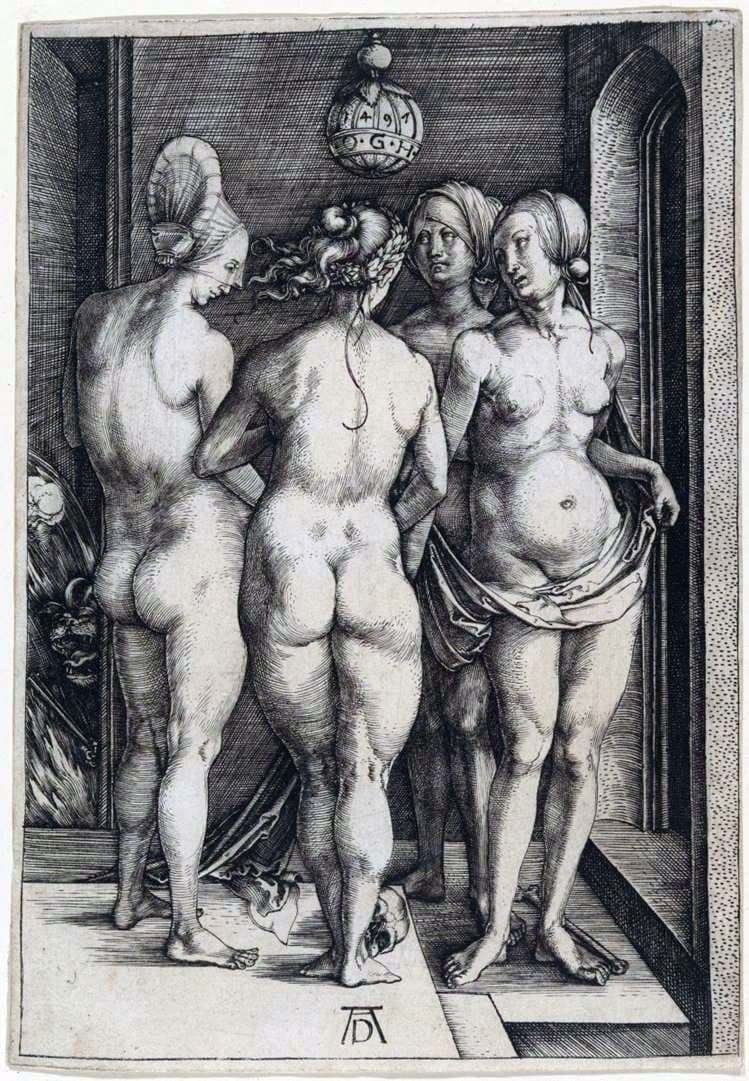 About this picture it is possible to say with confidence that it is one of the most popular in the work of Dürer. The engraving is called “The Four Witches”, and now we will examine in detail why this is what the art historians call it.

The engraving depicts a small and dark room that does not have any decorations or pieces of furniture besides one small lamp. The room is a bit like a small cramped bag that brings together something incomprehensible, mysterious. So, we see four naked women in front of us, only small capes they have with them, but they only emphasize the nakedness of the girls.

We see each of them only in a half-turn, but the poses are not repeated. The girls are like the four sides of the horizon. But it is not only nudity that unites them. The views of young nymphs are directed at something completely invisible and incomprehensible to the ordinary viewer. They see something supernatural.

decorated heads of girls. Two of them have beautiful kerchiefs, the one that stands on the left wears a tall and unusual cap, but the fourth one decided to just leave the sloppy curls and went out with her head uncovered.

Pay attention to the proportions of girls: one of them has a completely small and neat head, if we relate it to the whole body. In this case, the profile can be called quite classic. The second is pretty beautiful, but her eyes are full of suffering and pain. And the body she looks much younger than all the other girls around her. As for the third nymph, we simply do not see her face, because she has her back to the viewer, but the fourth girl is half hidden from the viewer, she seems to be embarrassed to show herself. She has an ingenious face, but with a rather incredulous grimace.

Comparing the ideals of the feminine beauty of those times and modern times, we see a large gulf, but analyzing the era in which Durer lived, it can be argued that the charms of the women depicted were rated very highly.