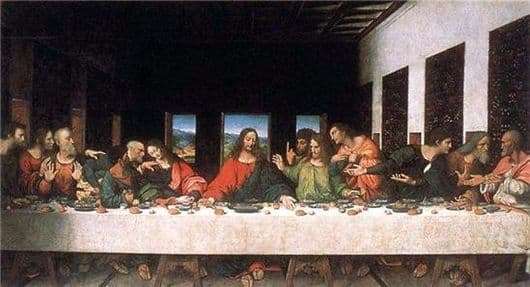 The Last Supper is a fresco by Leonardo De Vinci, which is presented in the form of a scene from the last supper of Christ surrounded by his disciples. The artist created it in the years 1495-1498 in the monastery called “Santa Maria” located in Milan. This work is quite traditional for that era. It is located in the refectory of the monastery.

The artist began his work in 1495, and it was finished after three years, as there were breaks in the process of work. To date, there are three known copies of the frescoes, which, according to the assumptions of art critics, were created by the artist’s assistant. The painting has already managed to earn the honorary status of a real milestone of the Renaissance due to the correctly reproduced depth of perspective, which could change the direction vector associated with the development of painting in the West. According to art critics, the fresco clearly reveals the moment when Jesus says words concerning the fact that one of the apostles will be his traitor, as well as the reaction to the words of Jesus by each of his disciples.

Virtually all previous works of the artist on this topic gave Jude exceptions in the form of his position at the table separately from other students, where he was located opposite them, or in previous works Jesus was depicted with all his students with the exception of Jude. You can clearly see how Judas squeezes a small-sized bag in his hand, most likely the meaning of which is the silver in it, which was received by Judas for betraying his mentor, or depicted in his hands as a hint of his key role all twelve disciples which he performs as the most important treasurer. He is the only one of the twelve apostles who is depicted with an elbow set on the table. The knife depicted in Peter’s hand most likely directs the viewer to the scene taking place in the Garden of Gethsemane during the detention of Christ.