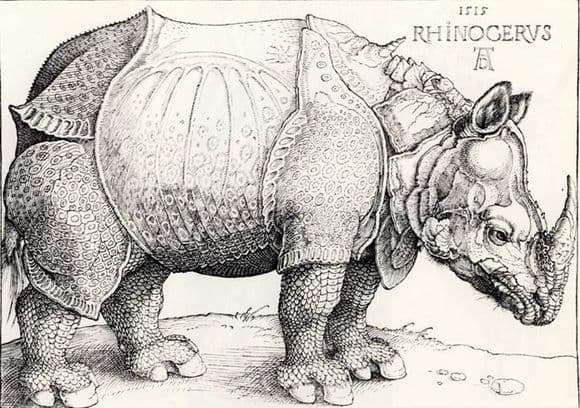 The engraving is made on wood. It was this image that had a tremendous impact on art. Until the 18th century, this image was used in all textbooks on biology.

Durer was able to draw a rhino, but he never saw him live. At this time in Europe it was believed that this animal exists only in myths. He was synonymous with something incredible.

In 1512, a rhino was presented to the Portuguese emperor, who was incredibly surprised by such an unusual animal. The emperor had an overwhelming desire to impress the Pope himself. He decides to please him with such an unexpected gift and sends a rhino to him. But the animal was transported by ship. Animal en route enraged. The rhino made a hole in the ship and the ship sank. All of Europe began to talk about this unusual beast. Durer fell into the hands of a sketch of a rhino, which was made by a man whose name is unknown.

The master was able to depict this incredible animal in wood engraving. It was Durer who popularized it. The study of rhinos on his work continued even when in Europe they were already able to get acquainted with this beast in person. It surprised many.

Durer endowed the rhino fabulous features. For example, on his back you can see another horn. In front of him a shield, and under the very face of the legendary armor. Some researchers believe that these armor is not the fruit of the imagination of the artist. Before the rhino was presented to dad, the whole idea was conceived. Rhino had to fight with an elephant. It is likely that it was for this purpose that the armor was put on the animal. The witness saw it in them and sketched.

Durer’s creation quickly became really famous. It sold in a large number of copies. So, Salvador Dali created a sculpture depicting this animal.

Durer’s rhino is charming today. Most likely, the secret lies in the surprise that this unusual picture causes.