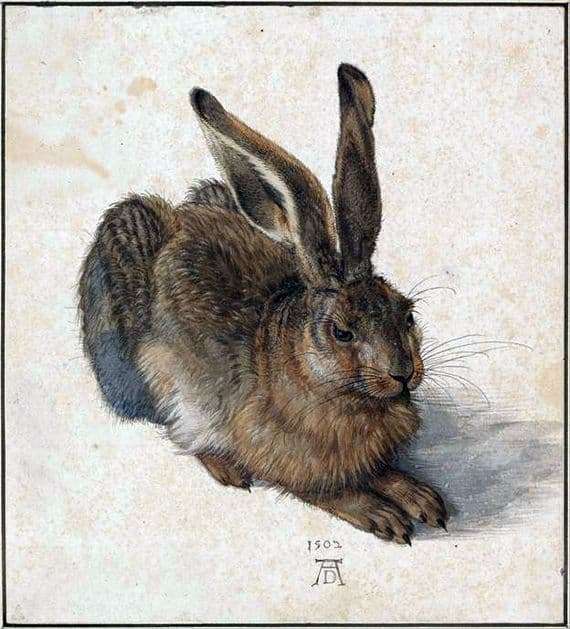 One of the most famous works of German artist Albrecht Dürer. Despite the fact that the master has many more remarkable works, such as a deer with prominent horns, or a dead bird with a rainbow plumage. The story of painting a picture has several versions.

According to one of them, once strolling, Dürer stumbled upon a sick hare who needed urgent care. He took him to his home and went out that is why the hare poses so quietly in front of the artist, and the window frame is reflected in his eyes. Also, it is safe to say that watercolor was painted in summer, because the fur of the hare in winter has a shade that is much lighter than is shown in the picture.

It is believed that Durer wrote his hare from nature, as the window cover is depicted correctly, given the bend of the pupil of the animal. Some art experts insist on the opposite, that the artist painted his picture from memory, and the reflection of the window cover in the pupil is called only a masterfully executed artistic technique. But rightly this hare will forever remain a work of art of the highest level. It is worth noting how masterfully the artist depicted the animal’s hair. How finely isolated individual hairs, it is shown that the hair in areas of the neck is wet. The author of the picture unsurpassed painted the eyes of his hare, ears, nose, which seemed to sniff something.

It seems as if it is not just an image, but in front of the viewer there is a living animal, who wants to stroke its fluffy fur. Durer was one of the first in German painting who used the technique of drawing with watercolors, and it was thanks to this that he was able to convey the main features of the animal’s appearance with high precision.

The hairs of the wool were worked over on top of the watercolor in gouache. This is exactly what made it possible to depict the wool naturally, because if you look closely, then you cannot find 2 identical hairs. And whitewash, in turn, create the effect of the volume of the hare’s body, giving its fur a feeling of lightness.