Home ⇒ 🎨Durer Albrecht ⇒ Description of the painting by Albrecht Durer “The Adoration of the Holy Trinity” (1511g.) 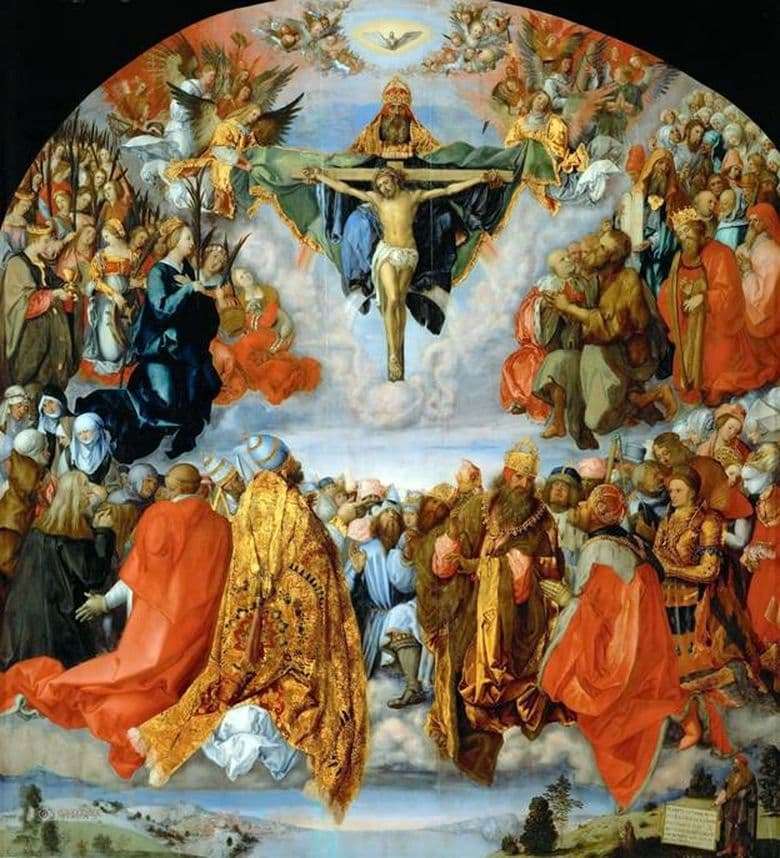 One of the most solemn works of Durer is “The Adoration of the Holy Trinity”. In 1511, the painting was ordered by the artist merchant and owner of the copper workshop Matthias Landauer. The artist’s work was intended for the altar of the chapel in the poorhouse for 12 lone artisans, which was built by the merchant. Landauer wanted his charges to pray for the salvation of his soul.

The artist painted the picture very solemnly, which is supposed to be the altar. The image of the Trinity is traditionally written. In the center of the image is the Holy Trinity – the Holy Spirit embodied in a dove, God the Father, Jesus Christ crucified on the cross. In the upper left corner are depicted the Mother of God and the martyrs, in the upper right corner depicted John the Baptist, the Sibyls, the prophets. In the lower left corner of the picture depicts the Holy Fathers church figures. Among them is the portrait of Mathias Landauer in a brown cloak, who bows his head in the prayer to the Holy Trinity. In the upper right corner are depicted the laity, under the leadership of the king and emperor. Among them you can see knights and peasants, noble and rich people.

The master painted the picture in such a way that the audience, looking at it, thought that the terrible judgment had passed, and justice, equality and fraternity reigned. Dürer conveyed the basic idea of equality before the Path of Mercy, where there are no rich or poor, nobles and commoners.

The whole bottom edge of the picture is occupied by the landscape, where the figure of a man is depicted on the right. The single man in the picture is Dürer. He portrayed himself sadly standing on the ground at the lake, where there is a cartouche with the signature of the authorship.

The ratio of figures, towering in the sky and the image of Albert Dürer, makes this work monumental, despite the fact that the picture itself is not large.