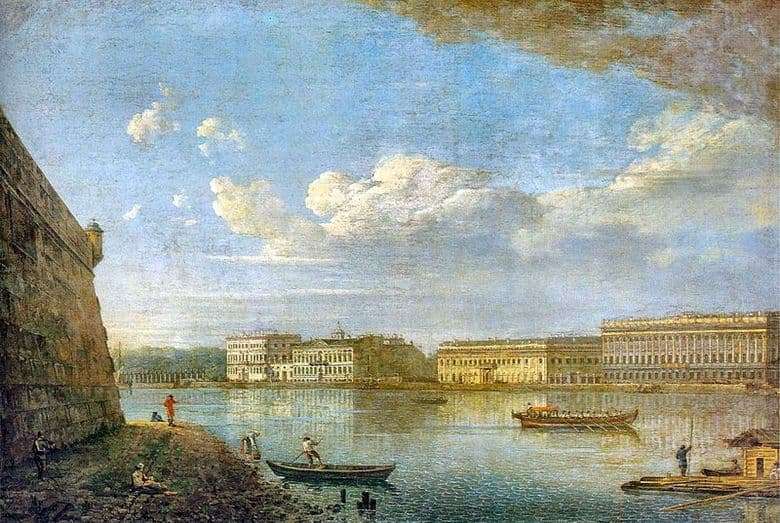 At one time, Alekseev was called an unsurpassed landscape painter, indeed, considering the painting “View of the Palace Embankment from the Peter and Paul Fortress”, I would like first of all to mention its liveliness and dynamics. Often the works of Alekseev, including this one, were compared with the paintings of the Italian artist Canaletto, who also worked in the urban landscape genre, but this was only one century earlier.

This work is not for nothing called one of the most famous paintings by Alexeev, in it he was able to display his style of writing in full. A wide and breathtaking panorama of the embankment, which is located next to the palace, unfolds before us.

The work of Alekseev’s art of the Vedas is often called monumental and masterpiece. He took advantage of a rather tricky trick: he combined in one picture what is so breathtaking with proper correct image. So, we see the clear blue expanse of the river. She is like a mirror, so pure is her water. The feeling is only enhanced by the fact that the action does not take place, for example, on a gloomy morning and an overcast evening, namely, on a sunny afternoon. In the mirror-like waters of the river, a blue sky is reflected with snow-white, airy clouds on it.

As for the foreground, the Peter and Paul Fortress is, of course, closest to the viewer. We only see its wall, but the outlines and location of the building accurately indicate its purpose.

If you let your eyes wander somewhere further down the Neva, then he will immediately catch hold of the huge and magnificent Marble Palace. Separately also depicts the service department of this building. When Alekseev finished his work, everyone was simply shocked by such a detailed visualization of the terrain. The image not only looks quite realistic, but also accurately conveys what is placed on this territory in life. For this picture, the artist received the title of academician and national recognition.

For his work “View of the Palace Embankment from the Peter and Paul Fortress” Alekseev received the title of academician.