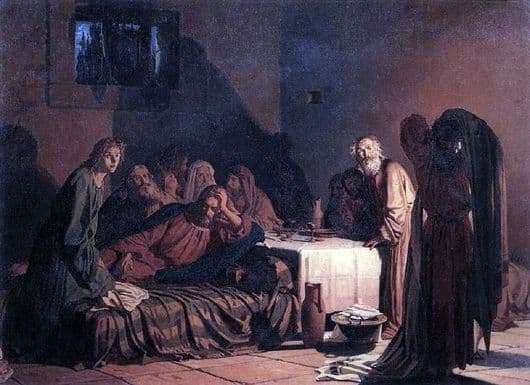 Today, Ge’s painting The Last Supper is considered a mighty piece, reflecting the artist’s perception of the biblical myth. In a small room with high ceilings and stone walls, in one of the houses of the city of Jerusalem is an ordinary couch on which Jesus leaned with his head bowed. Young John is at his feet, and behind him stand the shoulders of other apostles. Gray-headed Peter – at the head of the table. Behind him are several more fuzzy dark figures.

On the right, by the wall, there is a very powerful lamp, very brightly illuminating the whole figure of Peter (most of all his face), a white tablecloth on the table, the bowed head of Christ and the apostles’ eyes filled with anxiety and confusion. The lamp itself is not visible: it is covered by the dark silhouette of Judas (tall men with a beard). He turned his face towards us, and the figure cast a shadow on us. In this is traced the biblical symbolism: with a moral and righteous, sincere and moderate light, with a radiance of kindness and wisdom, a table is lit – the artistic personification of the community of spiritual food for the apostles.

This light illuminates Christ, the confused views of the apostles, aspiring to Judas, he falls on Peter, guarding the gates of paradise. All of them are indignant and confused by the act of Judas, which has obscured the light of reason. And only Jesus is calm and sad. Grieved him first of all, the fact that the shadow of insatiable greed can so easily cover us. In the picture, Judas is the artistic embodiment in man of figurative inhumanity, obscuring all that is bright and beautiful in the human soul.

On his canvas, Nikolai Ge managed to uncover Leonardo’s thought about immense greed and self-interest of man. He believed that if a person is not limited by the law, he will be many times over in cruelty, insatiableness and barbarism of any beast.