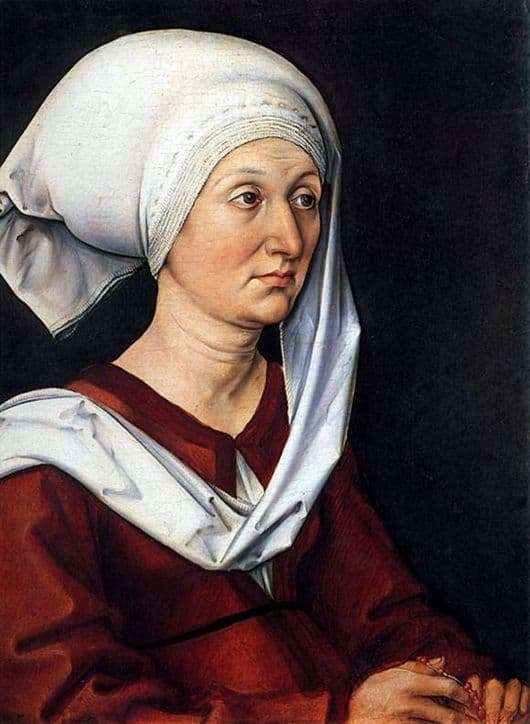 How beautiful and almost primitive portrait painting of the Middle Ages. It seems to be nothing so pretentious, normal serious faces or funny or slightly distorted by emotions. In this case, the mother of the artist Barbara Dürer is sitting in front of us.

About the family of the artist, we can say that it was the most large – 18 children. True, only eight survived, but by our standards this is quite enough. The surprisingly calm, gentle face is no longer a young woman, but at the same time she has remained very attractive. Her hair is hidden behind a large hood, as befits a German woman. There is nothing challenging in her appearance – absolute calm. True I think, in her youth she was still a beast.

But the interest is not only this portrait, but also what is painted on its back. And on its back is a landscape with a cliff and a dragon. It would seem to what? Not immediately clear. But if you think about it, you can come to the conclusion that Durer-son wanted to tell something to his descendants. Maybe there were temptations from a woman, and she could change. The rock is family, and the dragon is treason. Or maybe this interpretation: a dragon is death, a rock is a family in which there were children… But then another question arises… There is a canvas depicting the artist’s father, and there is also a sketch on the back. But also somewhat strange – the wedding coat of arms of the Durer family. And how to explain it? Rather simply – loyalty, a symbol of loyalty. Here you have a story about parents, though full of mysteries and misunderstandings…

But Dürer is known to the world not only for painting, but also for graphics. His graphics are gorgeous and, as a rule, on biblical topics. But there were also free themes: landscapes, animals, plants. And everything is so executed realistic that you wonder at the magnificence of the work. So his graphics can be called a little better than the graphics of Da Vinci and Rembrandt. In addition, he was fond of geometry. Many formulas derived by him are still being studied.