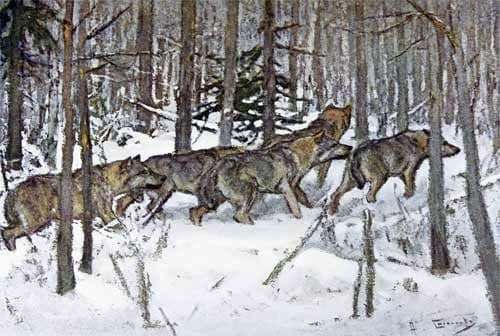 “Wolves” – the work of Alexei Stepanov, written in the first decade of the 20th century, is kept in the State Tretyakov Gallery.

Stepanova, a very gentle and kind person who was popular with numerous friends, was best described by his student P. Korin. He compared the painting of Stepanov with the poems of Pushkin, noted as the main quality – the soul, in combination with the highest skill, and at the same time sparkling simplicity.

Very early orphaned, Alexei Stepanov initially acquired the profession of a surveyor. However, then he was so fascinated by the painting that he entered and successfully graduated from Moscow School of Painting, Sculpture and Architecture. The love for animals, nature at the institute was instilled in him by Leonid Sabaneyev, the editor of the journal Nature and Hunting.

Then Stepanov worked a lot with Isaac Levitan – they laid the foundation for the so-called motive of mood in the landscape work. The artists supplemented, transferred to the canvas their thoughts, emotions, experiences, thus the landscapes, like Levitan and Stepanov, are deeply psychological, reveal the inner state of the authors.

Alexey Stepanov was very fond of painting pictures of rural nature, the theme of the road and traffic is especially significant for him. Broad strokes, but with a limited set of colors. A large number of paintings depicting animals in Stepanov reveal psychological motifs, the habits of animals.

Many experts view the artist as the second most important animal artist in Russia, after Serov. It was the animal theme that became the basis for Stepanov’s teaching work at his home university.