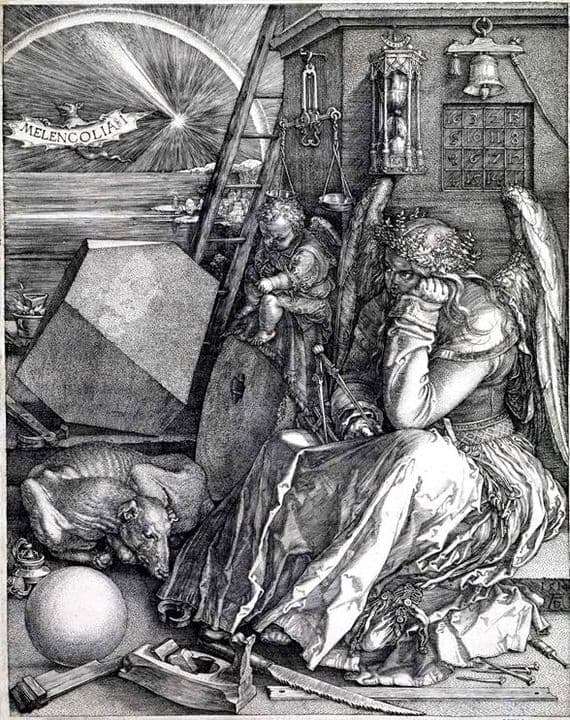 The picture is a cutting engraving, the base of which is made of copper. Its author is the German artist Albrecht Dürer, who finished work on his creation in 1514.

During the artist’s life, melancholic was decided to be divided into several types. Dürer himself referred to the first type. “Melancholy” art critics believe the most mysterious work of Dürer. It is special in that the author of the picture managed to complicate and make the idea of the image depicted unobvious, and also to diversify its plot with the help of bright symbols and allegories.

The size of the original work of art is 23.9 × 18.8 cm. “Melancholia” is one of the “Workshop engravings” – the three famous graphic sheets of Durer. The picture is rich in characters. Some of them are related to the planet Saturn. Attention is immediately attracted by the winged genius, who props his head. On his lap is a book. On his belt you can see a few wallets.

A little above Genius is Putto, who stands as a symbol of the angelic spirit. He is busy writing something on a wax board. There are a lot of things around the main characters. The author depicted a hammer with tongs, nails with a saw, a plane with a ruler. A dog is resting near the legs of a winged creature.

The walls of the building are decorated with scales and clocks. In addition, you can see the bell and the square, filled with numbers. A huge staircase is attached to a wall that is invisible. A rainbow appeared in the sky. The creature holds an inscription, which shows the name of the engraving.

Dürer succeeded for the first time in Europe to make a magic square – 4 * 4. If you add all the numbers in one of the lines, you get 34. Using the average numbers located in the bottom row, you can find out the creation time of the creation.