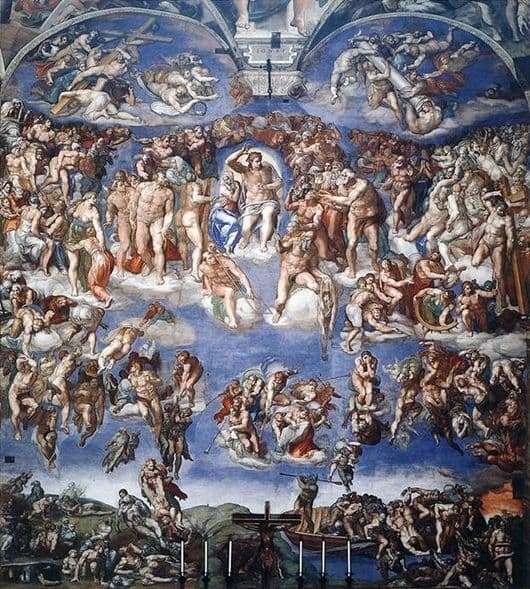 The fresco by Michelangelo Buonarroti “The Last Judgment” was created by the great Italian artist for 4 years. At the request of Pope Paul III, he painted the famous Old Testament scene on this fresco to adorn the altar wall of the Sistine Chapel. Christ, who is in the very center of the picture, does not look like a peaceful and merciful God, as in most paintings of that time, in Michelangelo he acts as a formidable and frightening judge of the righteous and sinners. The great painter has depicted all his characters naked, this is done with a deep meaning.

Through a variety of postures, Michelangelo masterfully conveys the movements of the soul of each individual person, while the central figure of Christ is not amenable to movement and remains stable. His face is impenetrable, and gestures epitomize strength, power, and retribution. Madonna, full of compassion for people’s sorrows, turns away. In the upper part of the picture angels fly with the attributes of the Passion of Christ. Among the depicted apostles are: Adam, from whom the human race began, and also Saint Peter – the founder of Christianity. The eyes of the apostles are filled with a formidable demand for the punishment of sinners, in their hands they hold instruments of torture.

Christ was surrounded by holy martyrs: Saint Sebastian, Saint Lawrence, and Saint Bartholomew, parading his skinned skin. A great many other saints who are near and at the distance of Jesus Christ rejoice and rejoice in the upcoming bliss, which the Lord honored them with as a reward for their deeds. Trumpeting the calling of 7 angels, sitting at the feet of Christ. Their faces terrify everyone who looks at them. The souls to whom the Lord has given salvation rise up and rise, dead and skeletons rise from the ground. Another man closes his eyes with horror with his hands – the devil himself drags him down.