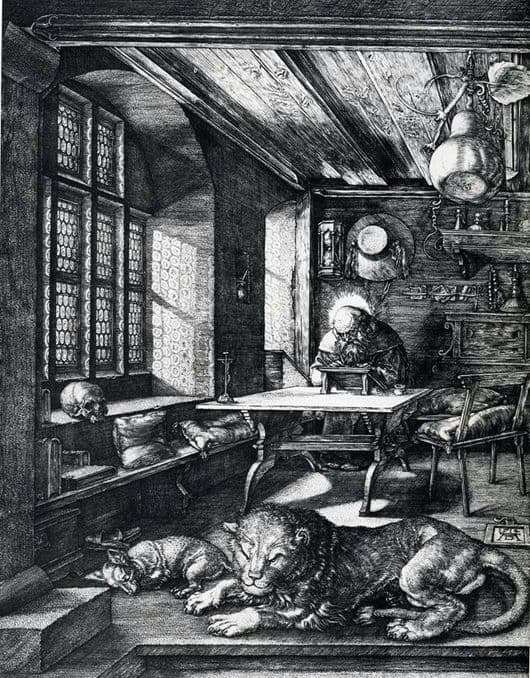 Albrecht Durer – the great German artist of the Renaissance. The orientation in which the painter worked was filled with expressiveness and a desire for realism. The moments of the artist’s activities included a collection of “three workshops engravings” on a religious theme. One of them was the painting “St. Jerome”, it was created in 1514. It depicts Saint Father Jerome, who was engaged in translating the Bible into Latin. Durer was so close to this topic that he decided to capture Jerome’s father in his cell, the whole process of his work.

The spacious and deep cell serves as a good setting for the work of Saint Jerome. A table with objects is neatly depicted, on it is only the most necessary: an inkwell, a stand for a book and a crucifix. Aura Jerome illuminates as if a higher power is present in the picture. Characteristics of the revival for the masterpiece. And Durer shows the holy father in the role of a scientist, and not as a monk.

The picture includes the satellite of Jerome – the lion, who is the most loyal friend to him. The lion, it is true, lies near the table, and does not prevent Saint Jerome from doing his own work. A lot of little things can be seen on the canvas. Careful study of all the subtleties is amazing. A dog near a lion peacefully slumbers. An hourglass on the table reminds of time, without disturbing the cell. It seemed that the picture had everything necessary for scientific work – as if the personal office was depicted by the painter.

The picture has achieved considerable success in the circles of many collectors. Fans of expressionism tried to get one of these works and spent a lot of money. The artist wrote his masterpieces according to the rules of the era, not excluding the truth of life. The work of St. Jerome in the Cell attracts with its breadth and simplicity of thought. This was the goal that Albrecht Dürer wanted to achieve when he created his masterpiece.