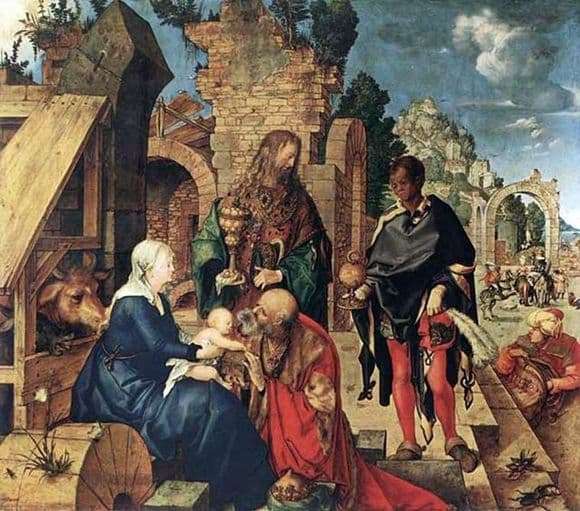 In the Uffizi Art Museum in Florence, Italy, Albrecht Dürer’s religious painting is exhibited – “Adoration of the Magi”.

The German master wrote the work to order to the electoral prince of Saxony, Friedrich the Wise, for his Catholic church in Wittenberg. Today, the picture is recognized as one of the most valuable fruits of Dürer’s work over a ten-year period from 1495.

Returning from a trip to Italy, inspired by the painting of this southern state, the artist began to work on a new creation. As a result, the Italian Renaissance brought into the picture a special technique of realistic perspective building.

In the traditions of the German Renaissance there was an image with close attention to detail, the use of rich, radiant colors, which is also clearly read at the first glance at the “Adoration of the Magi”.

Dürer’s religious picture echoes the plot of Leonardo da Vinci’s sketch work, with a large number of drawn stones resembling the works of Andrea Mantegna, the radiant aura of painting is like that of Giovanni Bellini.

But the most obvious feature of Dürer is the focus on depicting the dynamics of the spiritual life of the characters.

The painter placed in the foreground five figures: the baby Jesus on the mother’s lap and the three wise men.

Madonna is dressed in modest clothes, hugging a child in a white sheet, their faces are bright, shining. Bethlehem magicians – in expensive fabrics, with animal skins, with precious stones in gold jewelry. The eldest of the Magi fell to his knees before the Holy Family, held out the casket as a gift, and peered with anxious curiosity at the face of little Christ. Two wise men glance behind him, their faces full of disbelief and doubt.

The ruins of antique buildings in the background of the canvas grow dull in contrast with the figures of Mary and the baby. In this way, Dürer expressed the collapse of the old world before the birth of Christianity.