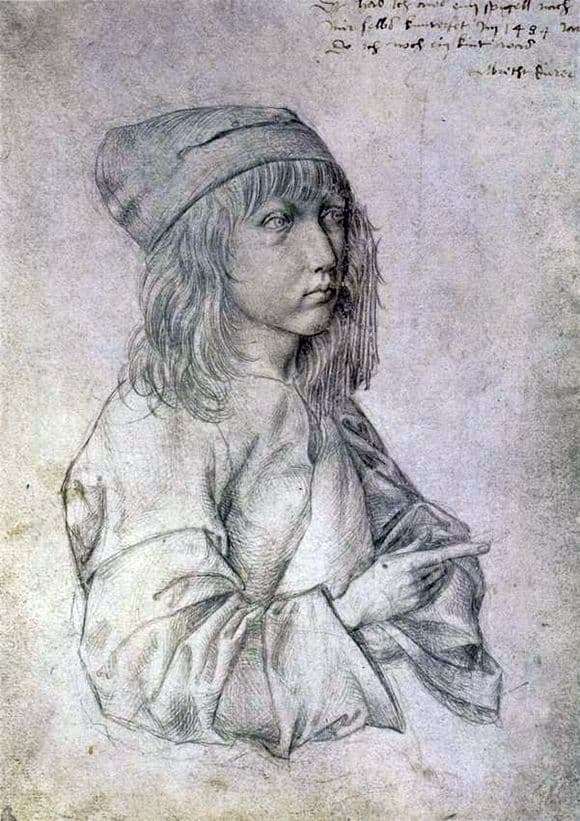 Albrecht Durer was one of the first artists of the West, who throughout his life created self-portraits. Thanks to a series of such paintings, one can trace changes in the artistic style of Dürer in a progression. The artist created the first engraving in 1484 – this is the painting “Self-portrait at the age of 13”. Made on a silver plate, the engraving is kept in the Albertina Gallery, in Vienna.

For the artists of the Middle Ages, self-portraits were not characteristic, the era of mysticism and the elevation of the divine over the human influenced this characteristic of the era. Albrecht Dürer made a series of self-portraits as an innovator of that time. The personality of the creator has always been suppressed by the subjects on which he worked, but from now on the view of painting has changed, because a new era in art has come – the Renaissance.

A young man of thirteen years old is depicted in a half-length portrait, turning three-quarters towards the viewer. The early portrait was made in pencil; improving their skills.

It is impossible to underestimate the artistic talent of Albrecht Dürer when considering his earlier works, speaking as a kind of innovator, he was recognized as the greatest painter of the wounded Renaissance era. The desire of the artist to master all new and new technology led him to the development of artistic woodcuts – printed and pictorial graphics, which became widespread throughout the world. The artistic talent of the master was influenced by such prominent artists as Raphael, Titian and Bartolomeo Veneto.