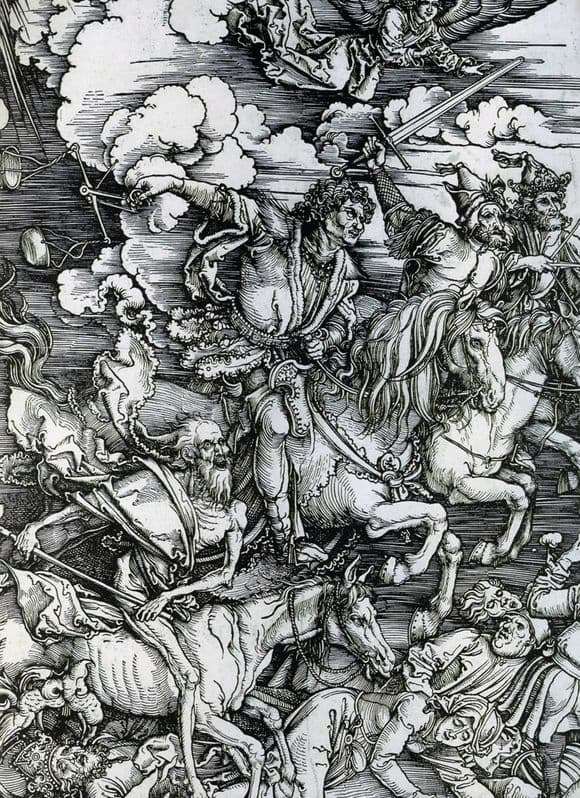 Apocalypse is the world-famous cycle of wood engravings by Albrecht Dürer on a religious theme. The series, made by the German artist in the three-year period from 1496, consists of 15 works depicting the biblical revelation of the final judgment. Prints were published twice. And the most famous is the “Four Horsemen of the Apocalypse.”

The engraver’s work illustrates the words recorded in the sixth chapter of the Revelation of John about four colored horses and their riders. These riders are engraved from right to left. The first one – with a crowned head, lowered the reins of a white horse, pulled the bowstring all the way up and looked at it mercilessly – Winner. The second – waved his huge sword, blinded by rage, he is rapidly racing horse – War. The third – without a headdress, richly dressed, with weights in his right hand, with an indifferent look looking somewhere afar – Hunger. The fourth – an emaciated elder with a trident, a bony leg almost touches the earth’s surface, his horse is equally exhausted, with a twisted rope instead of reins, without horseshoes with hoofs – this is Death itself.

Behind the horse, according to the Bible, hell follows, which Durer portrayed in the form of a terrible beast with an open toothy maw. All the ranks are carried without noticing a handful of people under their hooves: there is a ruler in the royal crown, and a citizen with a peasant, even a monk. Above the rapid, threatening movement of figures, a lone winged angel soars. No one will escape punishment for evil acts committed during his life – this is what the master wants to show us in this engraving.

The characters are shown close to the viewer, so that the illusion of the fusion of real and drawn space is created. “Four Horsemen” is about to jump out of the frame and overtake everyone, retribution is inevitable. The artist shared his apocalyptic forebodings with us.