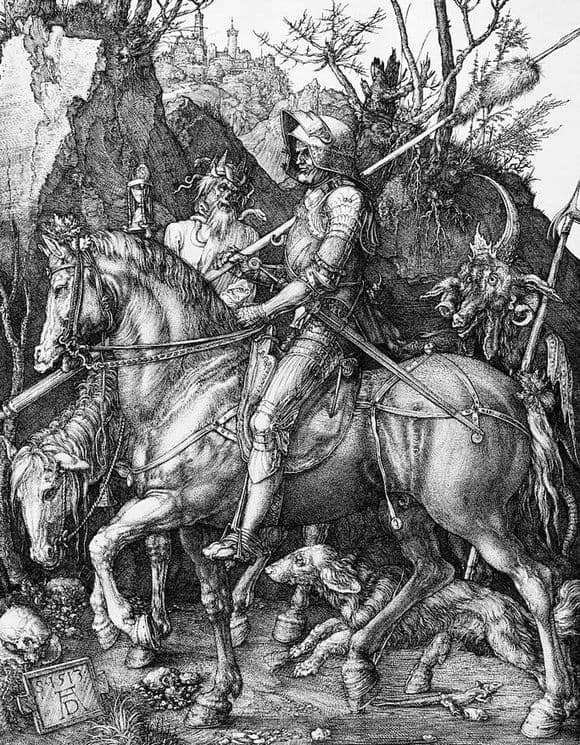 “The Knight, Death and the Devil” – a medieval engraving of Durer, depicting a Christian knight, passing through a narrow gorge. His horse stands proudly, carries the rider with dignity and ease, despite the fact that the knight is chained in armor.

A dog runs under the horse’s hooves, trying to keep up, the knight himself holds a spear on his shoulder, a sword in a scabbard at his hip, he looks only forward without turning his head, although unpleasant, frightening companions are walking next to him.

Death on an emaciated, pale horse, squeezes an hourglass in a bony hand, reminding the knight that his earthly journey is not eternal. She is covered with snakes, she has no eyes, and the fact that she triumphs the latter seems to be injustice. The devil goes behind, on his shoulder is a spear, his face is pathetic, piggy, elongated – he is like a beggar at someone else’s table. But as soon as

the knight stumbles, he throws himself at the fallen, will begin to tear with sharp pork tusks.

And at the bottom of the gorge there is a skull, bones, a lonely lizard, a dagger that fell out of someone’s hands. All this remained from the previous knights who flinch, who could not bridle their fear and send it forward. Armor of faith which went cracks under the gaze of death.

A living knight does not know fear. He is protected by the presence of God behind his back. As his body is dressed in armor, which will not miss another’s blow, so the soul is clothed with faith, which will withstand any temptation. Despite the vague sense of danger that the picture suggests, will the knight safely get out, will he be able to resist the empty eye sockets of death? – believe in the best.

A very confident knight moves forward, and his horse, feeling the master’s confidence, in vain does not add a step. Goes slowly, majestically, without showing a drop of fear. Only a dog, acutely aware of how dangerous the owner’s companions are, looks scared and runs forward, almost overtaking a horse.