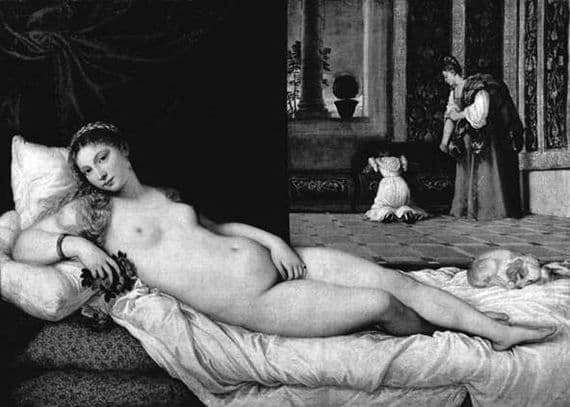 The famous Venetian painter Titian Vecellio always admired the world and appreciated its beauty. In a special manner, the master of the brush stirred the antiquity. The ancient characters of the artist seemed alive, so he boldly moved the mythological heroes in his era.

So, his famous canvas “Venus” is identified with the goddess Venus. The picture was painted for the Duke of Urbinsky, who in 1538 ordered two works from Titian – his portrait and the image of a naked woman. There are two versions of who was a model artist. According to one of them, Titian described the image of the young girl Julia Varano – the bride of Guidobaldo. According to another – his beloved woman. There was also the opinion that the canvas resembled Titian’s other painting – a portrait of Eleonora Gonzaga, mother of Gvidobaldo.

Whatever it was, but in the picture of Titian is presented a young Venetian, a real golden-haired beauty with a playful look and a delicate body. The girl looks confused, but sure that she is beautiful.

The scene in the picture is the room of a prosperous home. In the near plan in the palace luxury lies in bed a naked woman, whose eyes are fixed on the viewer. A woman covers her bosom, which has become a kind of center of composition, with her left hand, and holds a floral bouquet with her right. A little dog fell asleep near her feet. In the background, the artist depicted two maids, doing their usual things.

The meaning of the picture skillfully hidden. Some interpret it as marital fidelity, given that the myrtle is on the window – a symbol of marriage. Others believe that Titian created a portrait of a courtesan that offers himself to the public.

The originality of the writing of the artist Titian in Venus Urbinskaya was reflected. The painter sketched everything with his naturalness, demonstrating a high level of skill.