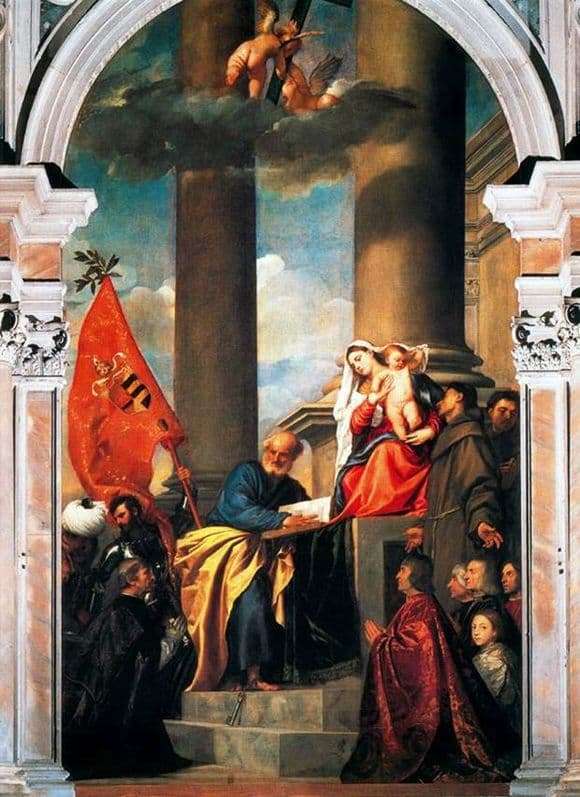 The greatest artist of the 16th century, of Italian origin, Titian Vecellio, better known simply as Titian, had a truly great lifetime glory: the most senior persons, both secular and spiritual, ordered his paintings, paying incredible fees. What can I say, if still a teenager, he was considered the best Venetian painter.

Looking even at this one picture, one can understand why he was so loved and respected. After all, the “Madonna”, which determined Titian’s own handwriting, is truly magnificent! It was written for the part of the altar, where, in fact, it is now – in the altar composition of the greatest cathedral of Venice.

We see how the Evangelist Peter interrupts the reading of the Gospel, laying his hand in a stopping place, with the noble goal of acquainting the Most Holy with the Bishop of Pesaro (in black, on his knees) and his family. The monk whispering to the Infant that the Bishop is before Him is Saint Francis. Behind him stands St. Anthony. Under these two saints, the bishop’s brothers and his son Leonardo pray (looking at the viewer).

Near the Apostle Peter is a warrior holding a flag with the emblem of one of the Roman Popes, and something menacingly speaking to a Turk in a turban. This moment sends us back to the year 1503, when the Vatican defeated the Turks in a battle at sea.

The author a little away from the canons of the then painting, placing in the center of Peter, and not of Christ and the Virgin. But the location of other characters, coupled with the light play of shadows and colors, still focuses the viewer’s attention on the divine personalities, especially since they are next to the pillars rising up to the sky, which makes the space wider.

Finally, it should be said about the amazing game of colors: despite the fact that there are many of them here, from dark to the brightest, the picture is not made pretentious and unflattering, but, on the contrary, attracts the viewer. This, by the way, is another distinctive feature of Titian, capable of masterfully playing with light and color.