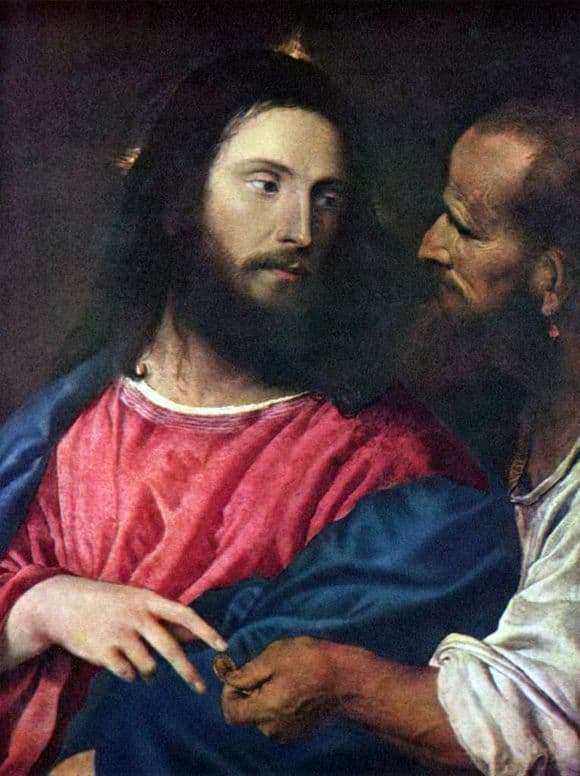 Titian created his grand canvas specifically for Ferrara Alfons dʻEste. The customer himself suggested the plot of this creation. At this time there was a struggle with the popes, and for her the slogan that Caesar needed to pay what was due to him was chosen.

Titian was agitated by the philosophical depth of this famous plot. Back in the 15th century, Leonardo was able to oppose the baseness and nobility of man. Titian also sensed these contradictions characteristic of his time. On its frescoes dark and light forces collide.

In his picture “Caesar’s Dinarius,” this contradiction is resolved differently. We feel the immense depth of the psychological plan. The theme becomes universal and acquires the loudest sound.

The Pharisees decided to destroy Christ by all means. They were scared to kill him. A whole plan was invented. A man with a dinar was sent to Christ. He asked if Caesar should pay taxes.

This question was a trap. If Christ answers in the affirmative, the entire population of Judea will necessarily be opposed to him. If he responds negatively, then the Roman authorities will punish him for it. But Christ acted differently. He asked the Pharisee about what is depicted on the coin he brought. The man was surprised and replied that on the one hand – God, and on the other – Caesar. It was after this that the phrase was said that everyone should get what was due to him.

The picture is very simple. The artist simply compared two people. There is no drama in it. Figures monumentized, no details. All attention is focused on the characters. Images are very capacious and most concentrated. Christ filled almost the entire canvas. It stands out against the background of red and blue.

Titian conveyed the theme of the meeting of absolutely opposite worlds: the ideal and the real.