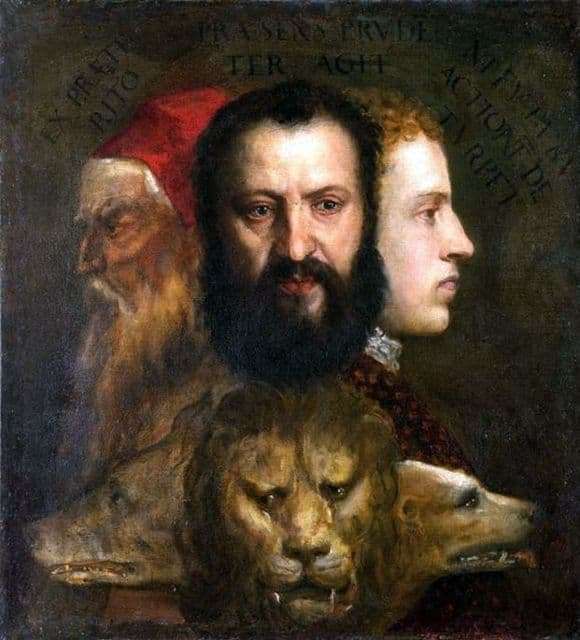 Before us is absolutely allegorical creation of the painter. To decipher this unusual allegory, you need to pay attention to the inscription in Latin. You can see it at the top of the canvas. Its meaning is as follows: the present must necessarily rely on the past. Only in this case it will not harm the future.

Titian portrayed not only himself but his son and nephew. Their portraits are one with the heads of three animals: a royal lion, a faithful dog and a lone wolf. In symbolism, this beast with three heads meant prudence. It consisted of three significant things: memory, knowledge and experience.

In antiquity, symbols were needed in order to denote important concepts as accurately as possible. A painter rightly likens a mature man to a lion. He has power over everything. He is the true ruler of this world. The young man is as trusting as the young dog that carries his service. Old age is wise, knows life perfectly, but it is physically weak and lonely. She’s like a wolf.

During the Renaissance, the works of the philosopher of ancient Rome, Macrobius, became very popular. He describes the statue of Serapis. This sun god is a real monster with three heads: a lion, a wolf and a dog. This is some kind of Cerberus. But Macrobius interprets this image differently. He says that these are three important aspects of a temporary nature. At the time of the Renaissance, this image was combined with the personification of Prudence, which was also three-headed. As a result, formed one.

The allegory of the artist strikes a difficult painting. All borders are completely blurred, themes of religion and mythology are interpreted very subtly at the level of psychology. It seems that this canvas is woven from sweeping brush strokes, which in some places were rubbed with just fingers. The tones complement and interpenetrate. As a result, unity is created. It is from it that the colors and forms originate.