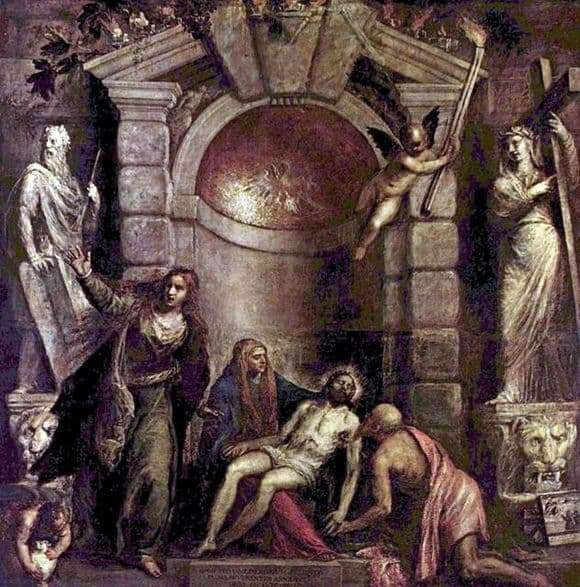 Pieta – Mourning Christ. This artist’s creation is the deepest in feeling and thought. This work has remained unfinished. It was completed by the teachings of Titian Palma the Younger.

We see a niche roughly built of stones. It is framed by two statues. Titian portrays people who are all embraced by a single sorrowful gust. On the lap of Mary rests the body of the dead Christ. Mary froze in utter despair, like a statue. The artist portrays Christ not as a martyr and a completely emaciated ascetic.

Before us is a hero who fell into a really unequal battle. The old man looks at Jesus sadly. Magdalen raised her hand in a gesture of utterly rapid despair. It is like a mournful cry in the absolute silence of the world. Her red hair fluttering. They become a kind of flash, which stands out in contrast with the twilight background of this canvas. The statue of Moses, carved out of stone, is really impressive. Facial expression is sad and at the same time angry. A grayish-blue twinkling of an almost completely extinct day illuminates this statue.

Titian was able to convey the maximum power of grief and the magnificence of grief. It is no coincidence that this creation was the last. The artist wrote a requiem, which he dedicated to the images of the characters he loved so much. The Renaissance is a thing of the past, and Titian regrets it.

All the colors of this canvas are dark. Brown shades prevail. Titian skillfully uses tones and semitones. Despite a certain monochrome picture, it is impressive. The artist creates live poses of the characters, in which you can also read despair and immeasurable grief. Titian prescribes each fold of clothing and bends of the figures. The statues are palpable. We feel that they are voluminous and practically alive. Titian created a truly ambitious picture, which summed up all of his work.