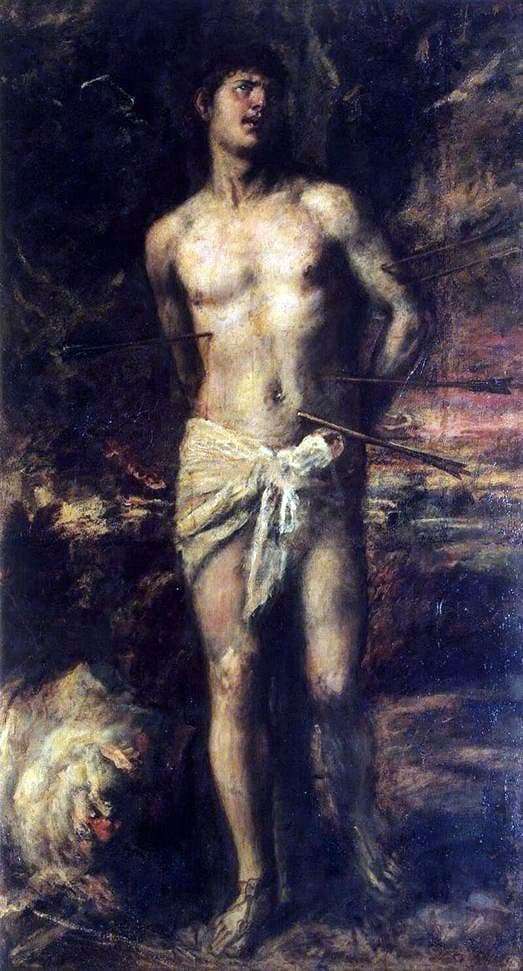 At the time of the early Middle Ages, the legend of Sebastian, born in the Roman city of Narbonne, was spread among the population. This young man who went to Rome after studying in Milan became known to Diocletian, the ruler of the empire. He appointed him the commander of one of the cohorts of his guard. But it soon became known that Sebastian secretly adheres to Christian doctrine. Then the young man was sentenced to death.

The image of the great martyr, a staunch supporter of the Christian faith, has become very popular among artists. Therefore, it is not surprising that the Venetian artist Titian painted it on his canvases.

The painting “Saint Sebastian” refers to the late works of the Italian. He depicted a saint chained to a tree with ropes, giving him a magnificent pose. The artist was able to clearly convey the persistent disposition of a young man, who retains composure and calm, despite the pain he was tormenting. He realizes that death will soon take possession of him, and accepts her offensive. The light falling on the face of the condemned as if contradicts the feelings of the person: he is uneven and restless.

A complete picture of the entire tragedy of the situation allows us to create the surrounding background. A fire burning nearby raises up flames, incorrectly lighting a half-naked youth. Smoke surrounds his feet. The sky of dark color imperceptibly passes into the earth of a similar shade. Reflections falling on the terrain create the impression that a strong fire is blazing behind the saint. It seems that the rest of the world is dying with Sebastian.

According to Titian, the picture does not reflect despair and despair. On the contrary, it personifies the power of the human spirit and its greatness. Saint Sebastian does not belong to religious fanatics who have dedicated their lives exclusively to fasting and prayer. This is a young man opposing evil.

The painting “Saint Sebastian” builds on the harmony and balance of lines and colors. It is the latter that serves as the main tool that allowed the transfer of the main idea of the work. As one of the researchers noted, Titian created a real symphony of colors, giving dominance to dark shades.