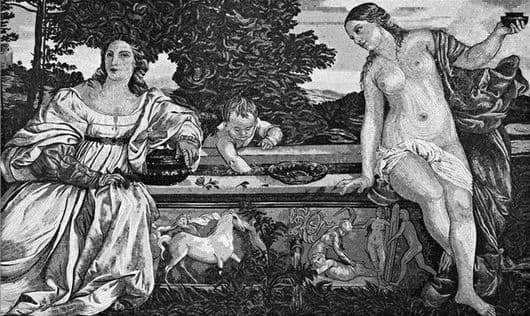 The great artist Titian was once ordered a painting, which he didn’t even mention, because he didn’t know what one of the greatest masterpieces of artistic art creates. The picture was painted in 1514, on the occasion of the wedding of a rich Venetian, who apparently ordered a beautiful canvas as a gift to his bride. Many years later, the picture was redeemed, and began to appear to the audience under the title “Heavenly Love and Earthly Love.” No one knew what the artist meant by drawing this composition, depicting a lady sitting next to a well and a goddess, who went down to her for an important conversation. You can understand that this is actually a goddess by the way she looks lovely and perfect, what forms this woman, who in her nudity is so beautiful that no one else can be.

The head of a naked woman turned to the beautifully dressed lady, as if asking her about something. The lady froze in thought, as if listening to a distant voice. Just behind this pair is a cupid boy. In the background, a picture of the lake is seen, and behind it the viewer can see the city, and a protruding church spire. The scene takes place at dusk, which are gathering behind the backs of the main characters, and only the light emanating from these two beautiful creatures allows the viewer to see the whole picture bright and bright. The researchers suggest that these women are Medea and Venus, but it is possible that this girl, dressed in a rich dress, is the bride who was intended to use the picture as a gift, and the goddess who came down from heaven came to envy her beauty.

Cupid also symbolizes the groom’s love for his bride. There is also a version which presents a picture, as a cartoon retelling of the plot of the then famous book of the Venetian writer Francesco Columns. Without knowing it, Titian painted the best picture of the past and of our time, which even critics of his work continue to admire.