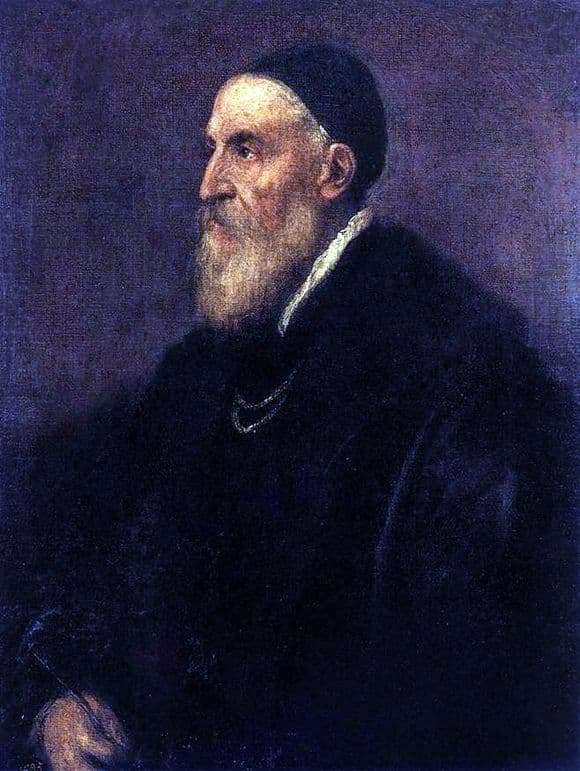 Titian was very famous during his lifetime. For some time he was considered the official artist of his country, noblemen ordered his portraits from him, he was so good at brush and paint that after the death of his teacher he was able to finish those paintings that he did not have time.

Throughout his life, with each of his canvases Titian glorified the ordinary world. Its beauty that lies in the details. His little joys that not everyone can see. His subtle irony, which can be seen in the chains of events, and the everyday happiness of being, which people often curtain in their own heads with curtains and hide from themselves, like something that does not exist.

All his life he worked hard, transferring the world to canvas, and he found time for a self-portrait only when he was an old man, and his death was already not far off. Rub it is rather strange and not too characteristic for Titian. It is very dark – the brown background merges with the artist’s black clothes, and only his open hands and face are visible.

Titian portrays himself as realistic as possible, without trying to embellish anything. His face is wrinkled, his nose hangs over his lips, his eyes are sunk, looking sternly and very carefully. The beard is neatly trimmed, the hair is hidden under the black cap, and the skin has the color of an old tree, a little yellowish tint inherent in ancient parchment scrolls.

In the face of the artist there are no special emotions. He is depicted in profile, looking past the viewer, somewhere beyond the edge of the picture. He is not joyful and not sad – he is calm, and his gaze expresses calm and composure. As if he already anticipates future death, and is absolutely ready for it. Life is good, but for a person wise enough, death is only a step towards the unknown and a new amazing adventure.