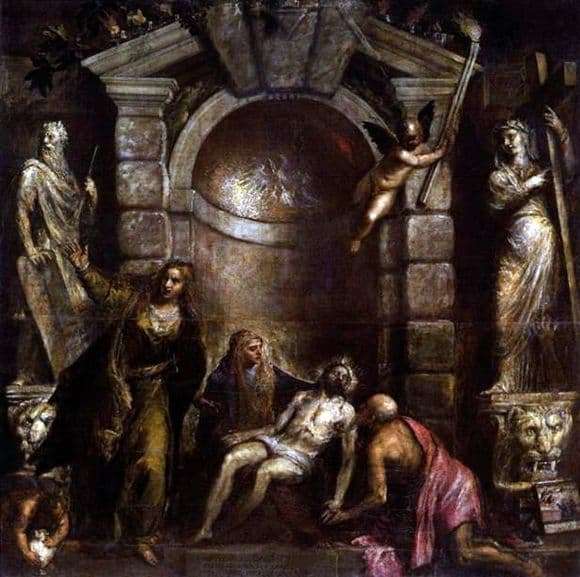 We have before us the deepest creation of Titian. It was created in the later period. The picture is striking a special feeling and extraordinary wisdom. The canvas was finished by one of the students of the painter after Titian died.

The background is a niche. It is composed of stones that are hewn fairly rough. This design is incredibly pressured by its weight. It is framed by two statues. We see people who are caught up in the same feeling. They grieve.

We see Mary. In her hands is the body of Christ. The heroine resembles a statue. She is immovable, because her grief is immense. Titian portrays Christ not at all as an ascetic, but as a real husband, who was defeated in the struggle. Forces simply proved unequal.

Looks at Christ. In all his pose and gaze, unspeakable grief is read. The hand of Magdalen in despair raised up. This gesture is like a frantic cry that pierces silence. We can feel the unspeakable despair that Mary seeks to convey with this movement. Her hair is flying. They resemble a flash. Her robe stands out against the gloomy background of the painting. Another bright spot is the old man’s red robe.

The face of the statue of Moses expresses both grief and anger. His figure is illuminated by the blue-gray glow of the day, which is almost complete. Titian is a true master. He manages to convey immense grief: its depth and special beauty.

The artist with the help of skillfully selected colors and shades conveys the special mood of this canvas. A certain sadness and grief is transmitted to the viewer. Titian’s creation is as expressive and volumetric as possible. All his characters are tangible.

The artist creates this masterpiece before his death. This is a kind of requiem, which he dedicated to all his beloved images. The Renaissance is already a thing of the past. The artist understands this and is sad.