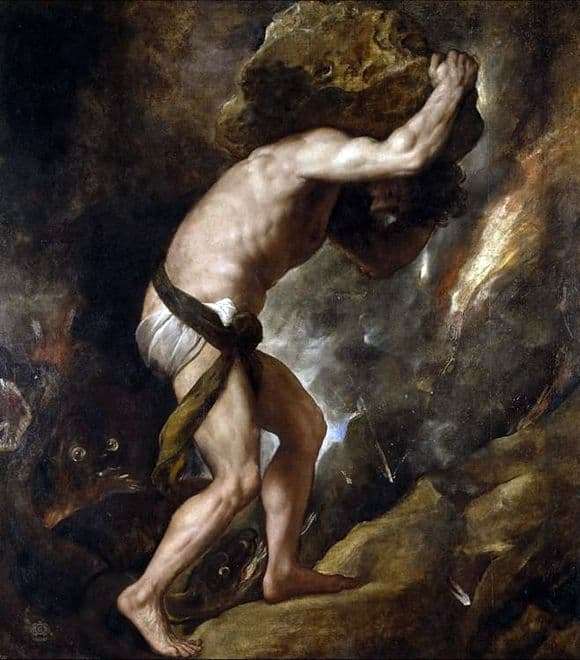 Another great picture of Titian’s “Sisyphus” refers us to a rather well-known ancient Greek myth, telling how the smartest of people who could deceive Death itself, Sisyphus revealed to another god the secret of Zeus without the permission of the latter, for which Thanatos himself should have been killed (Death itself ), which Zeus and sent. The young man deceived Thanatos and imprisoned him in strong chains, thus saving people from death (they simply stopped dying).

Angered by such insolence, the gods perplexed on Olympus, and then Ares descended to the ground, freed Thanatos and threw the guy into Hades. The guy did not lose his head here: he ordered his wife not to sacrifice to the gods in remembrance of him. The gods again did not understand what was happening. Aida’s wife sent Sisyphus back to earth to tell his wife that it was time to come to her senses and perform sacrificial rites.

Arriving at his property, the young man remained there, not intending to return to the kingdom of the dead. And he lived himself in clover for some more time, until the gods finally got tired of it; death came quite suddenly and took Sisyphus again underground.

Only this time, no one felt sorry for him, he was punished: from now on, he was obliged to drag the heaviest block of marble onto the highest mountain without sleep and rest. When he reached the peak and tried to install a lump there, she would break down and roll back. And the poor fellow started all over again… Hence the expression “labor of Sisyphus,” meaning fruitless agonizing work.

It was this work that Titian portrayed on his magnificent canvas. Moreover, due to the colors (Titian was a master of the game with light and color) creates the fullest feeling of combining man and stone into a single monolith, which embodies endless and useless hard work…