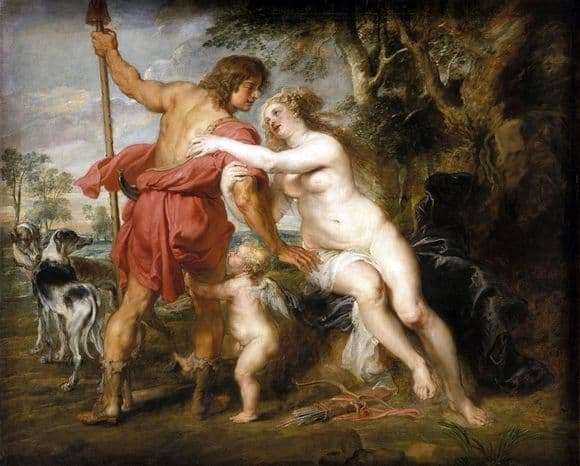 Venus and Adonis goes back to Ovid’s Metamorphoses, which tell the story of the first mortal who became Venus’s lover. Adonis was a young hunter, and Venus, when she was with him, often warned him about how dangerous this could be for him. But the young man did not listen to the warnings of the goddess and everything ended tragically – on one of the hunts he had killed a wild boar.

In this story, Shakespeare wrote a play in which he slightly changed the plot. According to his interpretation, Venus offered herself to Adonis, but he was so keen on hunting that he did not accept her and did not listen to her warnings.

Rubens’s picture refers precisely to this, modified, plot. On it, nude Venus, representing the contemporary beauty of Rubens, holds Adonis by the hand. She looks seductive and pleading at the same time – there is so much sensuality in her movement that he looks more like a offer than a prayer. Adonis looks at her enchanted, his face is dreamy, a little silly, and he himself is an idealized hunter. Muscular, with a prominent body, holding on to a spear. A small Amur embraces his leg, possibly serving Venus, and the crossbow fell from his hand.

It seems to be all right. Nobody goes anywhere and a boar with fangs protruding from the mouth will not wait for a young hunter. However, they are already looking at the owner of the dog with pinned sides, pulling him along, and no matter how charming Venus is, it’s worth blessing one of the dogs – and Adonis wakes up from her spell.

This future movement is already hidden in his body – in the hand with which he reaches for the thigh of the goddess, but at the same time he is preparing to push her away. Not rude, with regret, but still push away.

The tragic denouement laid in posture. And because in the eyes of Venus, in the bend of her lips, a longing for a young mortal is visible, who will soon confirm her name and die, despite the fact that she warned him.

← Description of the painting by Konstantin Korovin “Fish, wine and fruits” (1916)
Hilarion Pryanishnikov’s painting “In Ambush” →