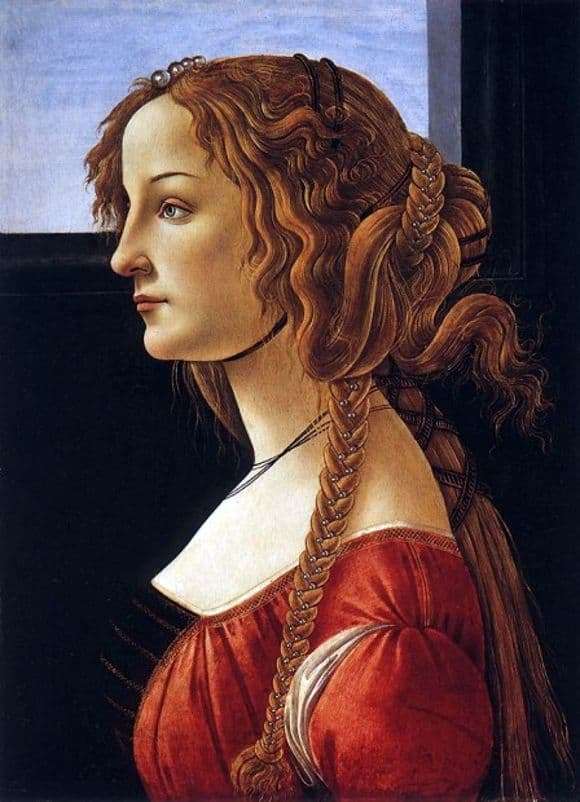 In the years of his life, Sandro Botticelli was a famous artist who was often approached with orders from portraits. One of those who wanted to order a portrait was Simonetta, one of the most beautiful women of the Renaissance. “Portrait of a young woman” 1476-1480 is considered one of the best portraits of the artist.

The beauty of Simonetta impressed many artists and princes, during her lifetime she was nicknamed “Incomparable.” There were opinions that it was Simonetta who became the model for the canvas “The Birth of Venus”. Simonetta died at a young age, but for many people she was a symbol of eternal youth for several centuries after her death.

In The Portrait of a Young Woman, the artist follows the traditional style of Filippo Lippi – he returns to the image of a strict profile with an elegant silhouette.

“Portrait of a young woman” allows you to consider the beauty of the girl, which the artist emphasized with numerous ribbons and pearls in a braid. Simonetta’s face expresses calm, in some moments you can catch the notes of sadness. She looks into the distance with thoughtful eyes, which does not allow the viewer to unravel or suggest what the model is thinking. Her narrow lips reflect inner restraint.

The portrait shows a dark room with a window in which you can only see the sky. It is here a symbol of the unmarried position of the girl.

The Vespucci family, from which the girl was born, was famous at that time for its wealth. But besides this, Vespucci was known to everyone thanks to the grace and mind of family members, which can be noted in the portrait of Botticelli.