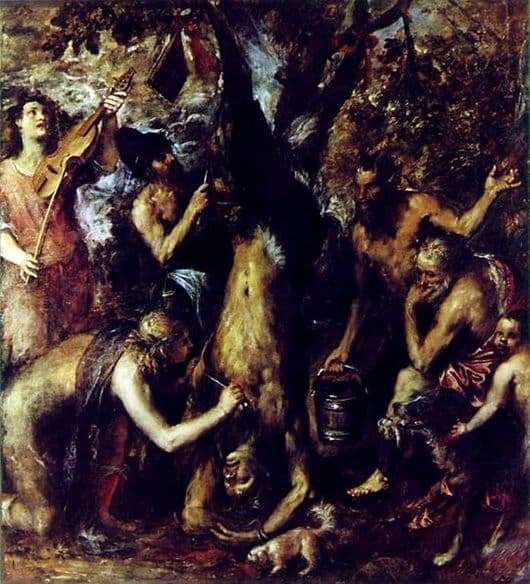 Titian Vecellio – the famous Italian artist who worked during the Renaissance. He is famous not only as a painter, but also as a talented sculptor. A follower of Giovanni Bellini created in the traditional style of the time – drawing from nature. Only with the advent of Giorgione appears his unique author’s style.

The painting “Punishment of Marcia” was made in a perfect drawing technique, perfected over many years. The artist continues the tradition of depicting myths and legends. It is based on the myth of Apollo and Marcia, who entered into a long argument: Which is better – kithara or flute? Whose mastery is higher – god or satire? Perhaps the artist wanted to show himself as his mind represented. You can see in the picture how Marsyus, once proud and arrogant, regrets his deed.

The picture is made in only three colors that incredibly accurately betray the horror of the presented situation. For the arrogance of satire ripped off his skin. Marcius acts as executioner himself Apollo, descended to the terrible cruelty of a man – he is squatting with a knife in his hand, already sentenced to punishment. At the same time, the sight is attracted by the figure sitting to the right of the main character – it resembles an artist who receives incomprehensible pleasure from the scene being watched.

The appearance of dogs on the canvas is also not accidental: in most cultures the dog is a man’s friend and his faithful protector. It also depicts a heartless and proud dog, sitting at a distance, and the second – eagerly fell to the flowing blood of the martyr.

On the face of Marcia himself, not very many emotions are expressed: only body language helps to realize what is happening in his inner world. The enemies that torment him sit in the shadows, and only a glimmer of hope for forgiveness is seen on the left side – the young man with a violin shows his submissiveness to Apollo and enjoys his hearing with music in the hope that God will forgive the satire for his deed. But it is clear from his face that his punishment is sickening. Raising his face up, the violinist seems to be removed from what is happening in order not to observe the whole picture.

The canvas “The Punishment of Marcia” was painted as the last canvas of the artist. Titian decided to leave a message parable of pride and arrogance.