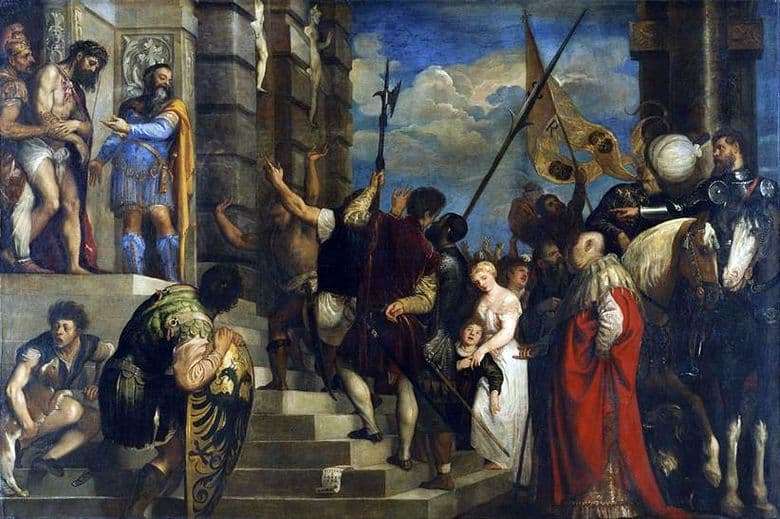 The artist is the most prominent representative of the Venetian school, his fame from the Renaissance to the present day is compared with Raphael or Michelangelo. Among his favorite scenes were biblical and mythical stories, he paid great attention to the creation of magnificent portraits, for them very influential and wealthy contemporaries posed for him.

The basis of this picture was the scene from the Gospel of John. On Good Friday, when the people demanded the execution of Jesus, Pontius Pilate ordered the soldiers to beat him and dress him up as a “king”: instead of the royal cape, he wore a red cloak (scarlet), the crown was replaced with a crown of thorns, and the scepter was a thin twig. In this form, the son of God on the canvas is depicted pale and tortured. The procurator by his act sought to cause pity among the assembled crowd. Dressed in gold and blue, pointing to the defendant, he says a phrase that has become winged: “Ecce Homo”, which means “that person”, “this is a person.” Thus, it was emphasized that those around him unjustly condemn an ordinary man to a terrible penalty. However, the majority consider the verdict to be true – upstairs are waving up their hands, a spear, a halberd, streamers… And only the girl whom the master highlighted with color hesitated and lowered her head, the child looks at her in surprise and confusion. In addition to her, the commoner and the warrior on the foreground steps were amazed at the decision: the first one turned away and opened his mouth in amazement, the second one bent over, recoiled and, fearing that his legs were failing, seized the shield.

Titian very accurately conveyed emotions, put color accents to create the desired oppressive effect. With great realism he traced faces, figures and muscles, details of clothes and weapons, texture of fabrics. The composition, despite the impressive number of characters, is well balanced, I want to consider and analyze it.