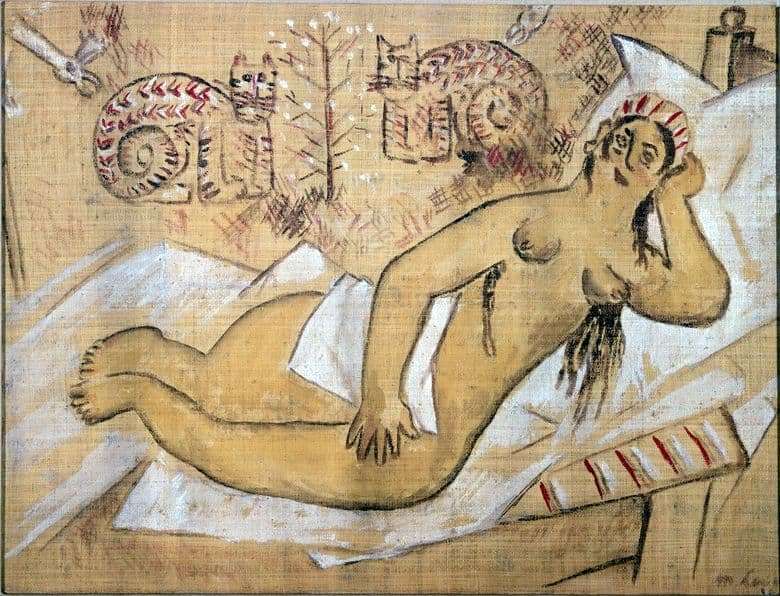 Mikhail Larionov painted the picture “Venus” in 1912. At that time, he was interested in manifestations of folk art, children’s drawings and art objects of ancient cultures. Therefore, archaic, simplified, even infantile stylistic resources are easily guessed in the outlines of the lying nude.

There are several colors in the image: bright yellow, white, details of green and bright pink, and the outlines of the figure are made in reddish-brown. Venus was written out by Larionov with his characteristic irony and smile. It is absolutely abstract, it is no longer a person, but a symbol, a scheme, although the artist tells us that there is a chest, a hair and feather bed. In the background, schematic creatures similar to cats are also guessed.

The authorship of Mikhail Larionov owns several “Venus” – Venus and Michael, Jewish, Katsapskaya Venus, as well as Turkish, Negro, etc. Each of them outlawed, became the answer to those who called on the artist to renounce the avant-garde movement, and return to classical art. They became symbols of the transition of Mikhail Larionov from neo-primitivism to abstractionism. Many, in particular, Alexander Benois, believed that Larionov could still become “an artist with normal behavior,” but Venus was the answer to these questions.

Despite the scornful attitude towards the female beginning, the author himself had a muse and ally – he met Natalia Goncharova in 1900, when he studied at the Moscow Institute of Painting. Husband and wife – Larionov and Goncharova – will walk side by side all the way avant-garde, there will be “Jack of Diamonds”, and “Donkey’s Tail”, and “Blue Rider”.