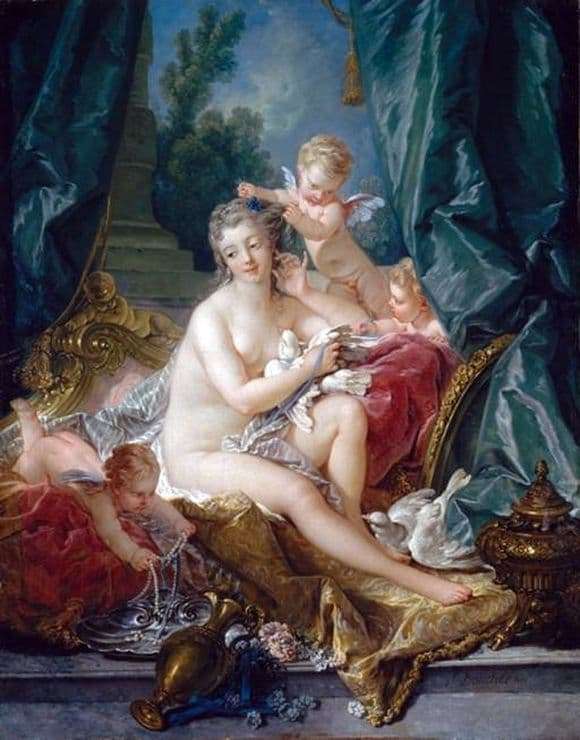 The painting depicts Venus – the goddess of love. She is completely naked, covers only part of her body sheets. She looks like a doll made of porcelain – the same large and doll eyes, almost unnaturally white skin, a mischievous look in the direction of one of the Cupids playing with her beads next to her. Her body is painted in rare and not the most natural colors. Boucher did not strive to show her perfect, because, according to his own statement, nature is not perfect. And if it is not such among the people, then why should the goddess necessarily be perfect? However, she reminds the palace lady of that time.

The picture is filled with many small details. Curls of the goddess curled, and Cupids if they are trying to wear it. But it is noticeable that it is much more interesting for them to play with her hair and jewels on the floor than to help her dress. Venus on this canvas is not the most modest forms, her body breathes health. She is sitting on the sofa, stretching one leg forward and pulling the other to herself. The sofa, which looks heavy even in appearance, looks luxurious, a large golden ornament runs along its back, and the sofa itself is draped in light silk. A dove coos near her feet. He fluffed up his feathers and looks at the goddess without taking his eyes off.

The second pigeon nestles comfortably in the arms of Venus and does not try to get out, and he does not pay any attention to cooing the pigeon at the feet of the goddess. Near the sofa is a large copper kettle. Beside him lies an empty wine jug and flowers cut off from the stalks. From the sofa, on which Venus sits, a heavy, white-yellow bedspread hangs down.