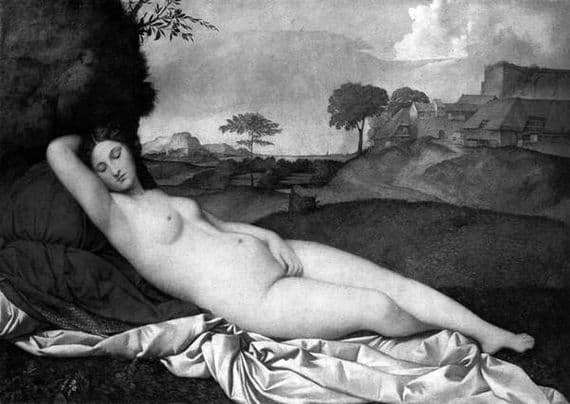 This painting was created by the Venetian artist Giorgione, who is known throughout the world. Shortly after the start of work on the Sleeping Venus, the artist left this light. And it turned out that the picture remained unfinished. It is known that Giorgione independently managed to write Venus. But the authorship of the rock, which is located behind a woman, may not belong to the author of the picture, who died of the plague in 1510.

Completed paintings were no less famous artist Titian. The latter perfectly coped with the landscape. His hand is credited with the written sky, the clothes on which Venus is located, and the cupid lying at the feet of the woman.

Experts have repeatedly noted that certain places in the picture also may not belong to Giorgione and Titian. After analyzing some of the data, it became known about the third handwriting on the canvas.

Similar motifs of this picture are found in the poems of Rome. There, the goddess of love, as a rule, rested, surrounding herself with a putti. Cupid was needed to wake the goddess. Then Venus was in a hurry to create a new family. Latin poetry has a similar plot. If you follow this version, then it is possible that Giorgione painted the picture for Gerolamo Marcello, who married Morozine Pisani in 1507.

There is a version that when creating his Venus, the artist was inspired by a single engraving of Polyphile. In addition, a similar posture was used by Titian.