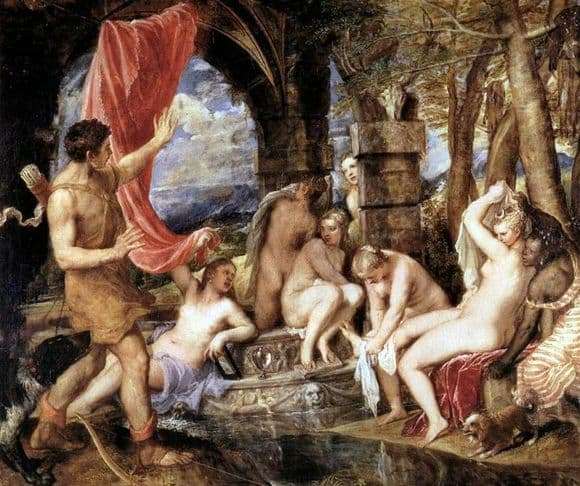 The painting “Diana and Acteon” came out from under the brush of the famous Italian artist Titian. She is part of a series of 7 paintings connected by a common mythological theme. Work on the canvas was completed in 1559, at the same time it was transferred to Philip II of Spain.

Of great interest is the journey of painting the world. From Spain it was transferred to France, where for a long time it was an ornament of the Louvre and Versailles.

After the Great French Revolution, Titian’s painting fell into England, where it remains to this day, being available for public viewing. For some time, the picture was part of the exhibition collection of the gallery in Edinburgh.

The scene of bathing of the goddess-hunter Diana occupies the central place on the canvas. The goddess sits on a bench covered with expensive fabric, a stream flows at her feet, the attendant wipes her feet. The goddess is completely naked and therefore extremely beautiful.

At the stream, she is not alone; she is surrounded by the same naked and relaxed gods. In the background are seen trees, antique columns and blue sky. Only a thin curtain separates the merry gods from the rest of the world, which is removed by the mighty arm of a young man dressed in a kind of toga.

Behind the shoulders of a man is a quiver of arrows, at his feet lies a bow, which the hunter dropped from surprise at the sight of such a beautiful creature. This man is Acteon, a glorified hunter who broke more than one woman’s heart.

Diana is outraged and frightened by the appearance of Acteon, her black maid is trying to cover up the lady’s sheet with her body, but everything has already happened and the hunter will have to answer for the blasphemy he committed.

No mortal has the right to see the gods in this form, his pride will be punished, but only connoisseurs of Roman mythology know this, the viewer has only this wonderful moment in which the artist managed to fit the charm of nudity, shame, anger, unexpected joy and admiration.