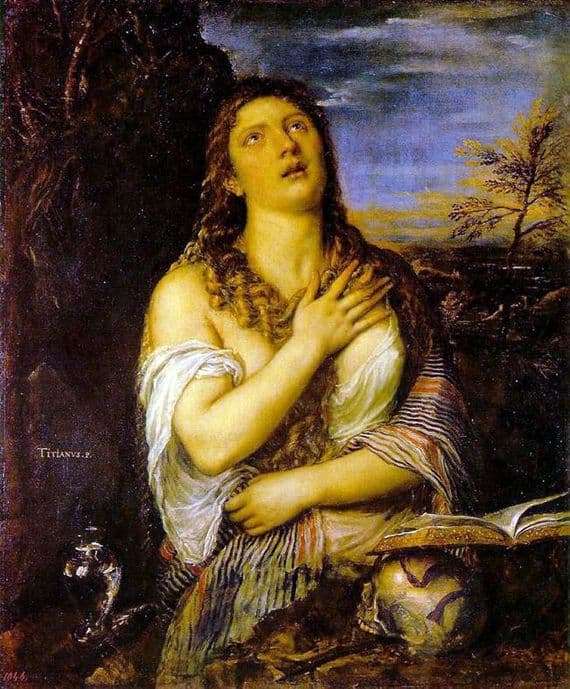 Tiziano Vecellio wrote his work “The Penitent Mary Magdalene” to order in the 60s of the XVI century. The model of the painting was Julia Festina, who struck the artist with a shock of gold-casting hair. The finished canvas greatly impressed the Duke Gonzaga, and he decided to order a copy of it. Later Titian, changing the background and poses of a woman, wrote a couple of similar works.

An old legend has it that, dying, Titian picked up this very painting. After the artist left (1576), the picture went to his successor, Pomponio Vecellio, who in turn sold it, as well as other works when selling the house of Cristoforo Barbarigo in 1581.

The famous artist Titian was a unique person. He skillfully transformed the repentant harlot who followed Jesus Christ through the desert in order to subdue his own flesh and wash off the stigma of shame into a wonderful feeling of grace and love. A woman looks at us from the canvas, the figure of which is slightly covered with airy fabric. Her hair the color of gold scattered across her chest in thick curls. The look of this genius of pure beauty is directed towards the sky. The woman, with her head thrown back, pleadingly, with tears in her eyes, apologizes.

Despite the name (“Repentant Mary Magdalene”), it is clearly seen on the canvas that a woman does not repent, it gives off a gracious feeling of love. Titian has allegorical overtones: the book, unfolded before the repentant woman, lies on the skull, and this is an unkind sign.

A little differently, the painter saw the meaning of the canvas – he depicted both a beautiful young woman and deep sorrow in the image of Mary, and also sang true love. The silhouette on the canvas is lined up on a sad background: you can see a dark rock, a blue-gray sky and exhausted trees. And in the midst of this sullenness she is Mary Magdalene, the personification of the feminine.