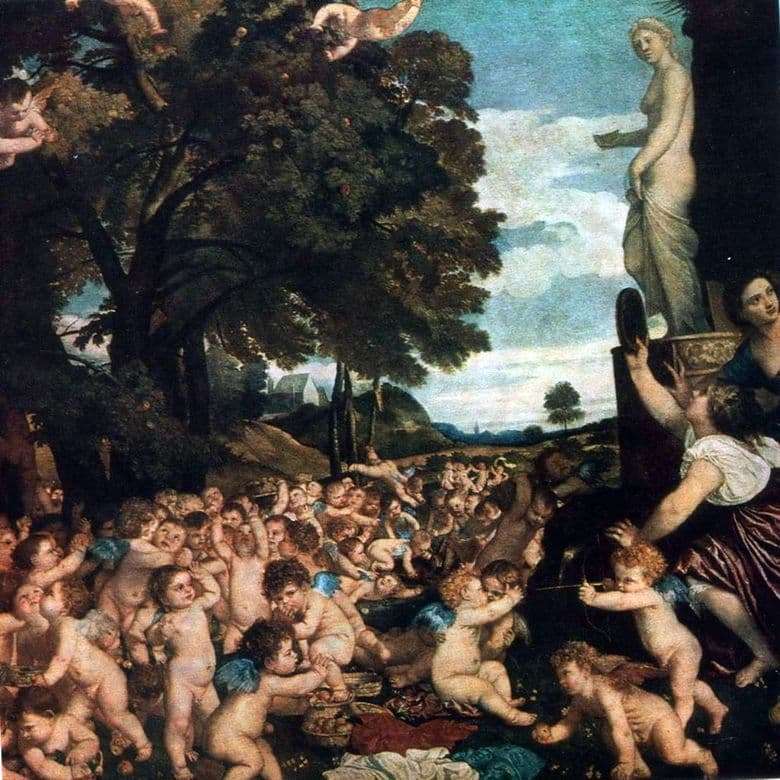 Mythological and biblical scenes occupied a significant place in the artist’s work. However, a deep insight into the questions of psychology made it possible to create surprisingly lively, realistic images.

The Feast of Venus is one of three paintings that were conceived as a cycle, commissioned by the Duke Alfonso d’Este. The canvases were intended to be placed in the alabaster office of his residence. This was reflected in the composition, where the figure of the statue of Venus was moved to the right, which allows you to focus on the cupids and the landscape spreading behind them.

Bright colors, amazing plasticity of each figure and a mass of detailed trivial details create an amazingly realistic image. The fictional story turns into a practically everyday mise en scene. It seems that each character in the picture actually lives, has fun and enjoys the beauty and splendor of nature. Each figure of the infant is highlighted with light and shade, they frolic on the grass among the rolled-up red-sided apples. The blue sky and tall trees that are located on the left and the static figure of the marble Venus on the left serve as the natural frame of the glade.

The contrast between the indifferent stone of the statue and the tumult of the life of cupids is underlined by different shades of the same color. The inanimate glow of the statue, watching the action on the meadow and the warm colors of the figures of cupids, bathing in the sun, attracts the eye. And it makes me look again and again in a vain attempt to unravel the secret of the mastery of the great Renaissance artist.