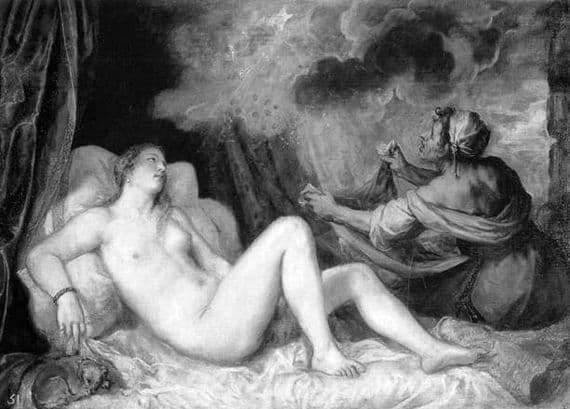 This picture was created by the artist Tiziano Vecellio. “Danae” is one of the paintings that were once written specifically for the King of Spain. The picture is written with the help of oil. Philippe II Spanish acted as the customer.

The images that are located in the picture symbolize the tragic changes in being. “Danae” has distinctive features from the previous period. Comparing this picture with the “Venus of Urbinskaya”, one can note the presence of drama, which permeated the entire work of art.

Judging from the work of the author, it is impossible not to note that he admires the existing burden of life. Of course, Titian is an innovator, because he managed to introduce a share of dramatic experiences in his creation and develop some kind of passion. Titian perfectly copes with color tasks and copes with tones, well combines them with shadows. With this, Titian was able to convey mobility and color, a clear outline and a soft volume modeling.

In his picture Titian exalts human beauty. By happiness, he means a fleeting exaltation of feelings. The author decided to compare Danai with a maid of old age for a reason. The latter is only engaged in collecting coins in your apron. Thus, the artist compared the beautiful and terrible in his work.

Titian believes that the human beauty and sincere feelings of Danae will always resist the cynical and excessive greed. This confrontation is supported by the hardened hand of the old woman.

With the help of the painting, Titian conveys to people the idea that the good always stands one step higher than the bad. He does not deny the great power of evil, but happiness puts forward as a weapon in the struggle for good. The picture is filled with the deepest sense. This was repeatedly stated by people specializing in this field of knowledge.