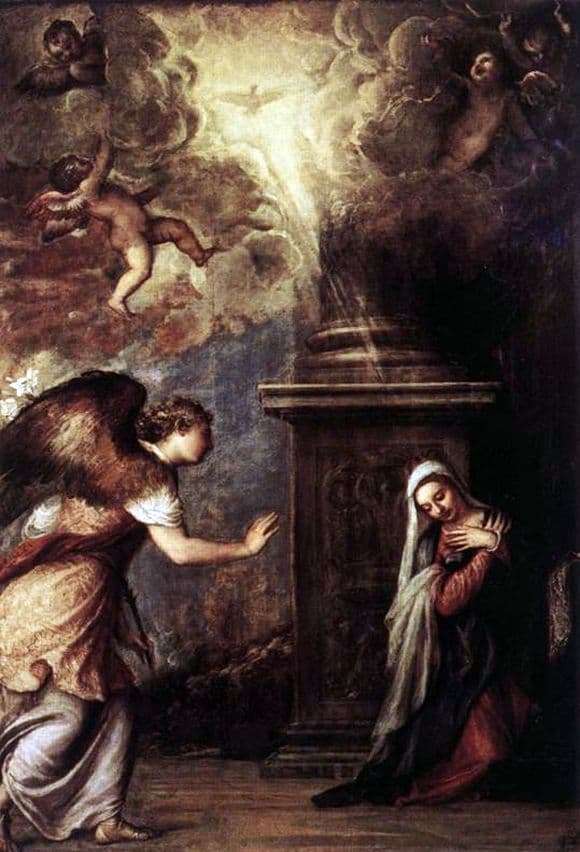 Working on this picture, Titian worked not only with his hands, but also with his fingers, trying to show the image that struck him in a fit of inspiration. He seemed to be trying to fashion the image of the archangels, the Virgin Mary herself and Jesus, his apostles. He worked on this picture for five years, preparing it for the church. She didn’t come out bright, rather the opposite, rather scandalous and having “dirty colors” work. Because of her contemporaries criticized Titian. Now this work is considered one of the most daring in his work, and in that era.

The painting depicts a plot in which the archangel Gabriel informs Mary that she is to face the Immaculate Conception of Jesus. The Virgin Mary is scared and squeezed, it was a very brave move, because most often she was portrayed as humbly accepting the good news or even joyful. The archangel only slightly touches the feet of the earth, and one wing lifted. He crossed his arms in front of him, showing meekness and humility to God. White clothes on him flutter freely, while on the Virgin Mary clothes are dark blue and lie close to the body.

On this canvas you can see the drama of Christian plots, which amazes the imagination and makes you look into small details and minor characters. The Archangel Gabriel is the central character of the painting, with the apostles looking down from above with clearly traced low skies. A lot of small winged nude images, each of which has its own facial expression and its own characteristics. Somewhere in the clouds there is a gap, which in itself attracts attention.