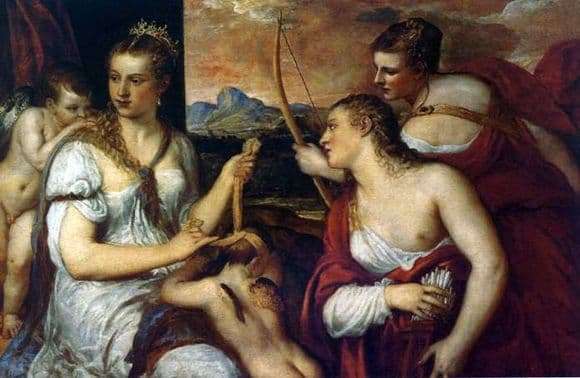 In one of his latest periods of creativity, the artist Titian, who lived from about 1488 to 1576, was literally obsessed. His main obsession was the desire to create paintings that would be full of drama. And the best of all for this purpose were suitable, in the opinion of the artist himself, Christian plots. At the same time, he was still attracted by antiquity in any, even the brightest and bold manifestations.

By his nature and paintings, the artist fully shared and supported the beliefs and beliefs of the Neo-Platonists that the best, purest and most original beauty will always be and uplift the person. This means that beauty has always had a religious meaning for an artist.

Therefore, the picture and Venus depicted on it, which blindfolds Cupid’s eyes, is not a simple game or interpretation of the author’s fantasies on a mythological theme. The picture is known around the world under several names.

Venus on her blindfolds Cupid, and the nymph, standing next to, serves Cupid’s bow. It was a hint that he would further launch his arrows, not at his own discretion, but at random.

First of all in this picture attract the attention of the girl. They are beautiful, charming, and in their own way inaccessible to neither people nor Amur himself. They have classic facial features, bright golden skin, and soft gestures are visible in every bend of their bodies. Silky hair completes their beauty.

Venus, blindfolding, is full of dignity and tranquility that it has. And the warmth that exudes her body and tranquility, is further emphasized by the fact that Cupid has buried her in her shoulder. Many people compare this gesture of Amur to the gesture of a nursing infant clinging to the mother. Therefore, the beauty of the picture acquires a life-giving, maternal beginning. Therefore, from the side, after some time after viewing, it seems that this picture breathes and fills everything around with love.