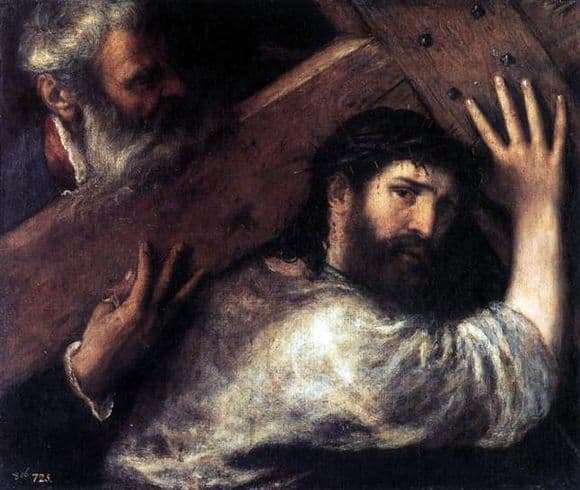 His painting “Carrying the Cross” the great artist Vecellio Titian, who lived in the Renaissance Era, created around 1565. He was a supporter of the theme of martyrdom and the new aesthetic direction of Baroque, which is clearly visible in this picture. Since 1850, his work, brought from the collection of Barbarigo, is protected by the Hermitage Museum.

The artist’s idea to depict Jesus Christ in this picture is not in the form of a deity who rules over all things, but in the image of a sufferer who steadfastly transfers his physical and mental anguish for the sake of humanity. Titian often took Bible stories as the basis for the plots of his paintings. This time he decided to depict the scene carrying the cross by the son of God to the place of his execution on Calvary.

On the canvas there are two faces close to the viewer. The central figure of the canvas is Jesus, in whose eyes the expression of fatigue from the heavy oppression of the cross, as well as from the suffering and suffering that is still waiting for him, stiffens. Thin streams of blood seep from his temples and neck due to the thorns of a crown of thorns stuck into his head. With the help of a dark background and strict straight lines of the cross, Titian emphasizes the softness of the silhouette, the pale complexion and hands of the Savior, dressed in light olive clothes.

The image of the second man of Joseph of Arimathea is shrouded in a shadow of twilight. He tries to help the martyr and take part of his heavy burden upon himself. The gray in his beard and hair merges with the attire of Christ. It is these techniques that help the artist to make the image of Joseph vague and almost ethereal, focusing attention on the main character.

Titian depicts the face of Christ unfolded to the audience. Probably, in order to meet his eyes, he remembered the sacrifice made by the Savior, and wondered how much it cost him.