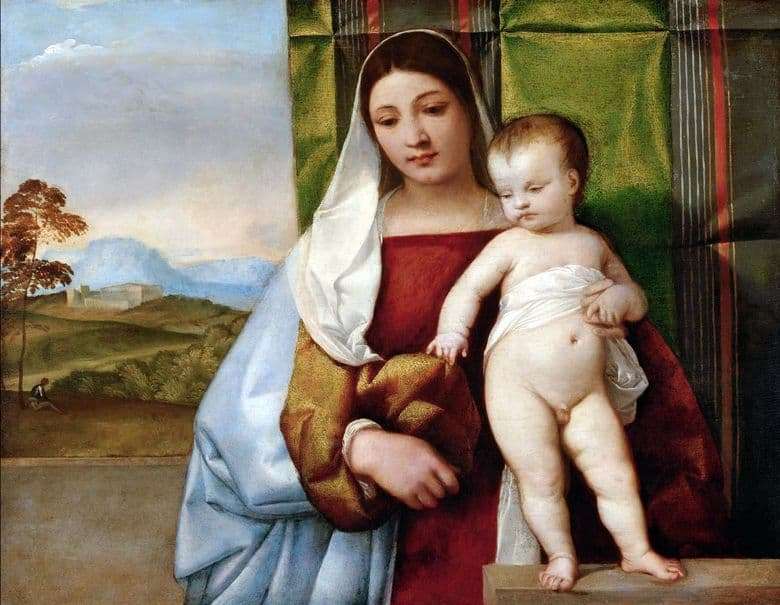 The painting “Gypsy Madonna” depicts the Virgin Mary with Jesus. The work received such a name, since the girl does not look like a European – she has dark skin and dark brown eyes. Also visible tar-black hair, knocked out from under the white cape. A woman is dressed in simple cut clothes, but it is immediately clear that she is sewn of good, expensive fabric. This is not cotton, from which the clothes were sewn for commoners. Maria is dressed in a long red dress, and on top of it is a white with a golden shawl that completely covers the body of the girl.

Jesus is depicted as a child, who only recently learned to stand on his own. Mother wrapped it in a piece of white scarf made of thin fabric. But the child is not cold, most likely, it is just a manifestation of love and care. An interesting pose in which Titian portrayed the child. It stands on a table that more resembles a pedestal, and the child’s body is bent exactly like a statue of David by the famous Italian sculptor and painter Michelangelo Buonarroti. In those days, this statue was a symbol of beauty, and was identified with the Renaissance.

Painting by Titian Vecellio “Gypsy Madonna” refers to the early period of the work of the Venetian artist. However, here we see that Titian had departed from the way, popular at that time, to depict the main figure in the center of work. Here we see that human figures break the symmetry – they are depicted in the right side of the canvas. Behind Maria we see a drape of bright green with stripes. The artist showed an incredible skill in depicting this fabric: it is clear that more recently the green canvas lay folded, somewhere in the depth of the chest, so we can observe all the bends and creases of the fabric.

In the background is the incredible nature of Florence, with its endless green fields and intoxicating low skies.