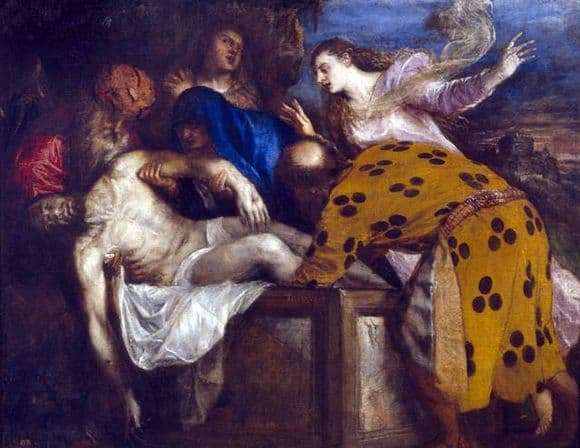 The painting “The Tomb” was written by Titian in 1559. The size of the canvas is 148 by 205 cm, canvas and oil served as materials for writing the work.

At the time of writing, Titian had a great interest in complex, dramatic topics, which was largely due to the events taking place at that time in Venice. The struggle in reality is reflected in his painting, the artist’s canvases are full of tension and grief.

The painting depicts 6 figures, the central figure, as it is easy to guess – Jesus Christ. Titian portrays him not as thin, as is often the case, but as a muscular man, which gives a sense of strength and ability to fight. Christ appears as a warrior, not a victim, the winner of a dangerous battle, not a fragile religious sufferer.

Human figures occupy almost the entire area of the canvas, the background is not clearly defined, a large area is also allocated to the coffin, on which, by the way, the artist places his own signature. The picture is quite bright. There are several large spots of saturated colors: red, yellow, blue. Christ is traditionally depicted in white, personifying purity and light.

Although, according to the biblical story, Jesus is placed in a coffin in full confidence that he is already dead, the picture does not express sorrow. A lot of white color helps viewers to keep hope for the best, for a miracle, for resurrection. Characters of the picture look at Christ with hope, clutch for his hands, as if not wanting to let go into another world.

The background is not detailed enough, but we see thick clouds and light penetrating through them. Titian skillfully combines the mood of the characters and the mood of nature, this connection is obvious. We understand that not only the figures of heroes and their emotions are subject to movement, but precisely the same movement is subject to changeable nature.