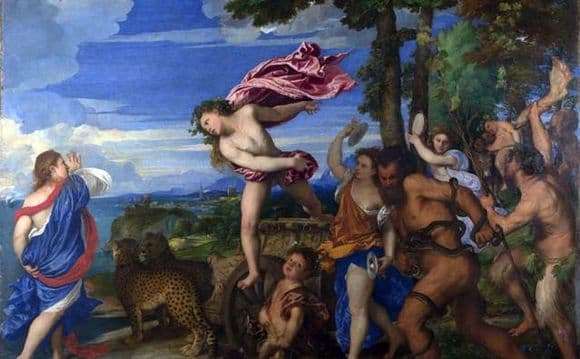 For the collection of the Duke of Ferrara, Titian made in 1523 a canvas based on classical myths – “Bacchus and Ariadne”. This picture was ordered to decorate the palace walls in a single mythological theme. Before the order went to the then famous master Raphael, but his unexpected death interrupted the embodiment of his plans. Then the work passed to the young Venetian talent Titian. And now we can all see the magnificent performance in the picture of the poetry of Catullus and Ovid in the London gallery.

The plot of the canvas tells of the ancient Greek history. The two main characters – the god Bacchus and Ariadne meet in the left side of the picture. The right part is occupied by a motley, numerous retinue of a young god: a powerful bearded man entwined with snakes, playing music for women, a boy satyr with the head of a dead animal and other interesting characters.

Bacchus seems to hang in the airspace, making a step to exit the chariot. The pink cloth covering slightly his body is thrown back energetically and develops in the wind; the gaze is fixed on the beautiful guest of the island of Naxos. Ariadne, abandoned by Theseus, sailing here on the ship, is frightened by the unexpected appearance of a group of people on a quiet land. Still not distracted from the tragic parting that had happened, she catches the eye of the comer to console her Bacchus.

The composition can be divided into two equal triangles on the diagonal of the canvas. In the left – the sky turns blue and there is exalted love between Ariadne and Bacchus. In the right triangle – the atmosphere is opposite: free festivals and animal wildness.

A clear cluster of stars appears in the celestial surface – a constellation into which Ariadne, cast on the distant island, will later be turned.

Titian’s merit is in the marvelous mastery of writing dynamic figures and in the harmoniously selected rich color palette of the picture.