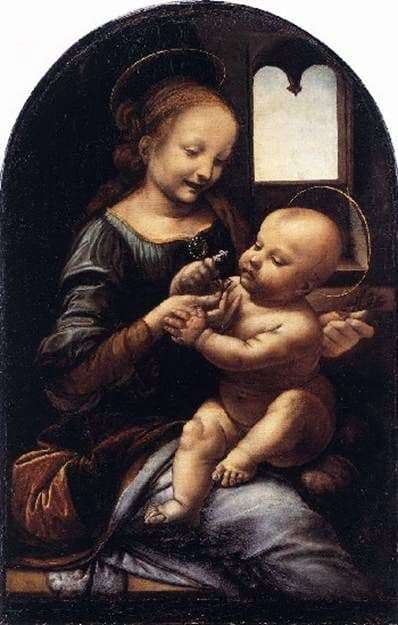 Madonna with a flower is one of the first works of art of Leonardo. Da Vinci portrayed Madonna in a room with a darkened view, in which the image in the depth of a double window is the only source of light. The window is presented in the addition of greenish light, which can not completely absorb the twilight, but at the same time, it was more than sufficient to ensure that the figure of the Madonna and the young Christ was clearly clarified.

The main manifestation of the figure of the Madonna and Christ made the light that pours to the left from the top. With this light, the master was able to give the picture more animation in the form of a game of light and shade and give the aggregate volume to two figures. In the XIX century, this work was successfully transferred from board to canvas, as evidenced by a corresponding reminder in the Register of paintings by Mr. Alexander Sapozhnikov, which was compiled in nineteen twenty-seven. ” Madonna ” Leonardo De Vinci gained wide popularity among the painters of that era. And not only the majority of Italian masters adopted the techniques of the young artist in their works, but also the majority of painters from the Netherlands.

According to art historians, at least ten works of art with a similar theme were performed under its direct influence. Among these works it is worth noting the work of Lorenzo de Credi ” Madonna and Child and John the Baptist ”, which is currently in the Dresden art gallery, and ” Madonna with Carnations ” is the work of Raphael. However, later one of the most unique works of Leonardo was lost,