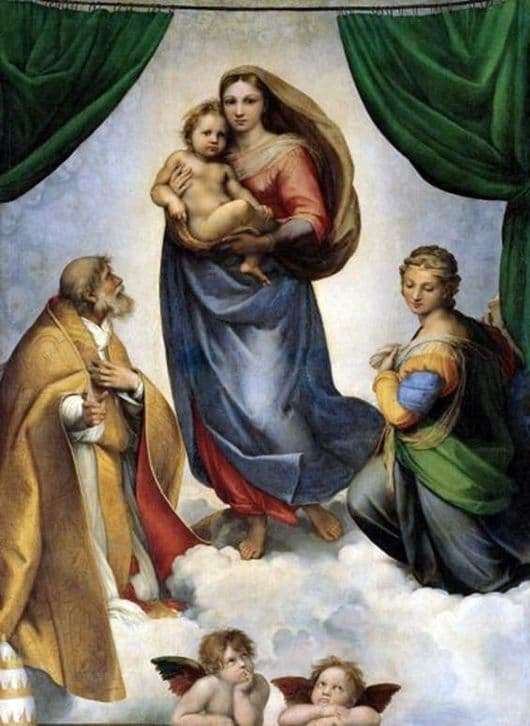 The picture depicts a woman with a child, but it is not just a woman, it is a maiden holding a blessed child in her arms. Her tender and at the same time sad look as if knows about what ungrateful future awaits her son. The child, on the contrary, is full of life, strength and energy, which is very clearly seen from his constitution.

Mother tenderly and tenderly holds her son in her arms, pressing her naked body closer to herself, as if trying to protect him from all the troubles that life brings to us. In the picture, a woman is depicted standing in heaven, because she gave birth to the Savior’s light, she brought the Blessing to the land of sinners.

At first glance, the picture is simple and clear, but Rafael has always invested more in the meaning of the picture than he could realize the “simple”, uninitiated mystery of painting miracles. Viewers can linger long in front of this picture, admiring the beautiful face of the mother and still very childish, but already clouded by reason, the face of the child.

Their integrity as if tells us that their mission on earth is just beginning and the deprivations prepared by fate only emphasize the significance of their actions. This is a Divine child, presented to the world, and perhaps sacrificed, in order to show that everyone is born the same way, that people, sons of the Lord, but only by pursuing righteous goals, you can find your place among the white clouds.

The “Sistine Madonna” is a masterpiece, because it combines incompatible phenomena, like a frail human body and sacred spirit, like the birth of children and atonement for sins through murder, typical of “simple” people.

Everything is mixed up, everything argues with each other, but at the same time, one another complements. Without a body, it would be impossible to depict a woman who gave the world a divine child, without spirit there is no life in the body, without the natural birth of a child, people would understand that they are also able from birth to walk in a righteous way, like becoming sinless without atonement for sin.

So many emotions fit on one canvas, so many human minds and thoughts lay on the bed of knowledge of truth, but only the author himself can say with confidence and without fiction what he had in mind, combining incompatible things.