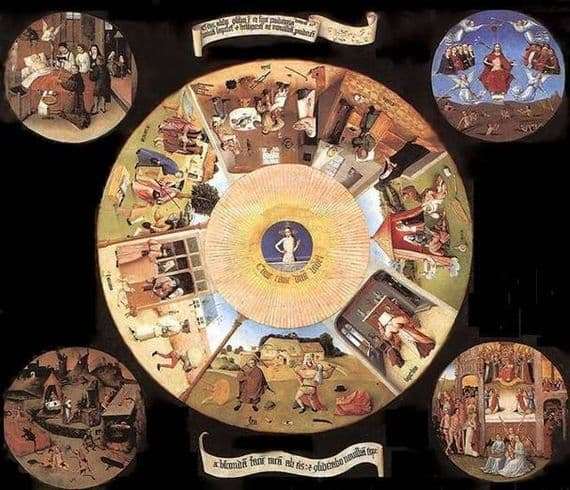 25 paintings and 8 drawings by this painter have survived to this day. The most famous painting is “The Seven Deadly Sins and Four Last Things”.

Like Dante Alighieri from the Divine Comedy, who descended into Purgatory and learned all his circles, Jerome Bosch recreated the sins of man on his canvas, according to the religious canons of his time. The painting was painted by the artist’s favorite technique – Alla Prima, when the first strokes of oil paint create the final texture of the canvas.

“Seven deadly sins” – a unique masterpiece of the artist. Having the form of a kind of “tabletop” (although it has never been), written to demonstrate to man his sinful nature and philosophical edification, the picture makes an indelible impression.

On a dark background of the canvas a multi-structured composition of five circles of different diameters is drawn. In the very center there is a semblance of the all-seeing eye, inside of which is Jesus Christ, who observes all the events in this world and noticing all the sinful acts of man. Around Jesus, counterclockwise, as the author originally conceived, are depicted genre scenes, written in a detailed manner of the old Dutch school of painting.

Anger – depicted as a fight between two men and a woman who had been pretty drunk before that; pride – a woman who eagerly peers into the mirror, which served as Bosch’s favorite allegorical demonstration of vanity and pride, since it was considered the devil’s tool; lust – two couples in love, seized by passion; laziness – failure to fulfill his duties as a priest, to whom a parishioner came to confession; gluttony – a fat man who eats everything on the table and cannot get enough of it; greed is the bribing of a judge, on whose decision the fate of a person depends; jealousy – expressed in the oblique views of the elderly spouses at their neighbor, who made an expensive purchase).

At the bottom of each image there is an inscription in Latin or a quote from the Old Testament (for example, under the eye of the Lord it is written Cave, cave, Deusvidet – “Fear, for the Lord notices everything”).

Four circles of the same size are located at the four corners of the picture (the so-called tondo), which complement the meaning of the picture, demonstrating the results of human life – death (the dying man surrounded by priests, at the head of which stands Mrs. Death, the Angel and the demon);

The Last Judgment (apostles, souls awaiting a fair trial and angels with the trumpets of Jericho);

Hell (a very realistic depiction of sinners, boiling cauldrons, torture and devils) and Paradise (the apostle Peter opens the gates to the righteous, the Most High on the throne and the saints).

Almost all the paintings of Hieronymus Bosch are permeated with ironic sarcasm over the futility of human existence, but the picture “The Seven Deadly Sins” makes you think and rethink your life to make it cleaner and more spiritual.