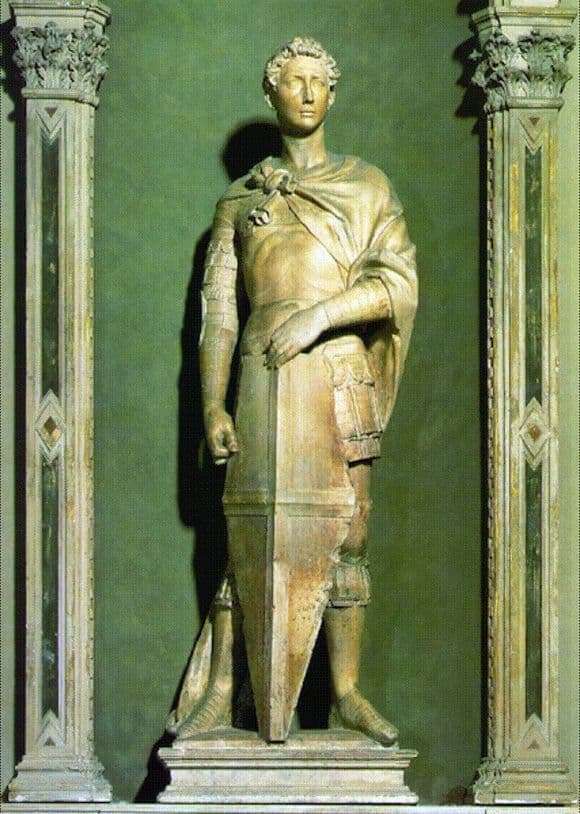 Sculpture “St. George” was created by the great Italian sculptor Donatello between 1415 and 1416. According to the custom of the time, the sculpture was ordered and paid for by the gunsmiths workshop, who planned to install a statue of their patron in the outer niche of the Or Or San Michele church.

The created sculpture exceeded all expectations in its magnificence. St. George, who is the patron saint of all warriors who go to battle to defend the ideals of humanism, justice and the purity of the human soul. Donatello allowed himself to create a young youth, firmly standing on his feet and directing his clear gaze to the distant future.

St. George rests on a large shield, which depicts a cross – a symbol of the entire Christian faith. He is not a peaceful messenger – he is a warrior, distinguished by his steadfastness, faith in God, his own strength and people who are ready to follow him.

One glance at the sculpture is enough to understand how brave and courageous a man is, forever frozen in the form of a stone sculpture. The courage of Saint George is also given by powerful armor, the brilliance of which has been available for contemplation for only a few decades.

In the original version, there was a helmet on the head of St. George, and a sword in his hand. Numerous movements of the statue, its long storage in the place inappropriate for this, and a number of other not very pleasant circumstances, led to the fact that the sword and helmet disappeared.

Despite the fact that at the time of creating the statue, Donatello was at a rather young age, he succeeded in something that no sculptor could do before him. It was Donatello who for the first time managed to give the motionless statue the appearance of lightness and readiness for movement, for which they used the illusion of rotational movement.

The creation of “St. George” brought Donatello world fame as the greatest of the sculptors of his time.